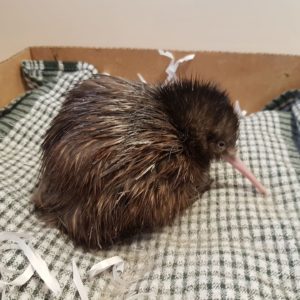 Northland’s summer drought resulted in some unusual kiwi behaviour as kiwi struggled in the dry conditions, including an increase in daytime sightings and nest abandonment.

Two separate projects, the Pukenui-Western Hills Forest Trust and Tutukaka Landcare Coalition each monitor a handful of kiwi with remote telemetry equipment. Both projects were monitoring nesting kiwi “dad’s” that had been incubating eggs for over 50 days, when the transmitter data started showing increased nightly activity rates as the dad’s spent longer and longer off the nest in search of food and water.

Pukenui Rangers Bevan Cramp and Ben Lovell said after 70 days of sitting on two eggs a male kiwi named Sayyad decided to leave the log where the eggs were in the Pukenui Western Hills Forest.

“In an attempt to save the eggs we had to cut our way into the log which was as hard as concrete thanks to the hot weather. Once in we discovered the two eggs both of which were cold – not a good sign,” Cramp said.

The two recovered eggs were taken to Robert Webb at the Whangārei Native Bird Recovery Centre and put in an incubator on February 10. One was found to be infertile while the other flourished with the chick deciding to start pecking its way out on February 26. 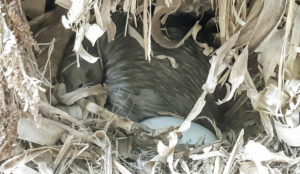 Marohi the kiwi pushes the egg out to the side as he prepares to abandon the nest. Photo: Malcolm Pullman

Out on the Tutukaka Coast, another kiwi drama was unfolding. Marohi the kiwi had been sitting on his nest for 55 days when he decided to abandon his nest and focus on surviving the drought. Tutukaka Landcare kiwi trackers Nan Pullman and Mike Camm called kiwi expert Pete Graham from Northland Regional Council who advised that the egg be moved.

Again, the egg was already “stone cold” when it was taken into Robert Webb for incubation.

Nan Pullman said “We were delighted when after three days in the incubator the egg started showing signs of life!”

Within a couple of weeks, much sooner than expected, the Tutukaka kiwi chick also began hatching.

Hatching is an tiring process that can take up to three days. With no egg tooth to help the process, the kiwi chick has the exhausting job of kicking and pecking its way out.

Webb said he had to hand-hatch both eggs as the dry weather had also affected the egg embryos which were starting to dry up and had begun to shrink, effectively shrink wrapping the chicks.

Webb could hear the chicks calling inside their eggs, tapping on the egg wanting to break out.

“It’s the last thing you want to do is hatch them but if you don’t they will die,” Webb said. 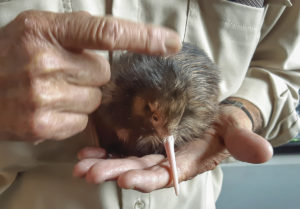 The chicks were both moved into a brooding cage and introduced to worms and finely sliced meat. While both chicks initially thrived and were very active, unfortunately the Pukenui chick did not survive.

“We were notified by Robert that our kiwi chick suddenly took a bad turn and passed away. Rob and the team are completely stumped as to what happened. Little fella just started going down hill and there was nothing he or the vet could do to get it to come right.”

The good news is that the Tutukaka chick, which has been named “Grace” is still doing well. S/he will be released back into the Tutukaka Landcare predator controlled area once the Covid-19 Alert changes to a status that allows this to happen.