As we struggle in the Northland drought, spare a thought for our wild kiwi who are also trying to cope with the hot, dry conditions and are feeling the heat too.

So how do they cope? How do kiwi stay cool? Information from transmittered kiwi in Northland shows they are using a variety of survival tactics. 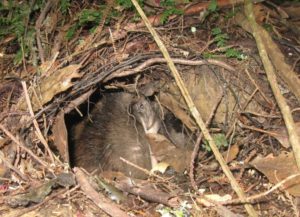 Firstly, they are seeking shade and cooler roosting sites. They are roosting in cool, damp areas like drains or culvert pipes, in deep rock crevices in the bush and waterways and in hollows in the banks of creeks and streams.  Adult males on nests are doing it hard, with their sole incubation duties that stretch out over 70 – 80 nights – especially if they are late nesters and their nest site is exposed to the hot sun or far from reliable water.

A few have been found with their egg close to the nest entrance possibly to stop overheating.

Kiwi also use some of the techniques used by other animals to keep cool, such as panting. Birds have no sweat glands so they can not sweat to cool off like we do. Instead they pant, a little like a dog does but more efficiently with less water loss. They breathe much faster and use the air to suck moisture from the lungs and mouth. This then evaporates using heat from the bird which is lost in the breath.

Feather fluffing exposes more skin to the air which can then allow heat to be lost. Most birds can unfold their wings to expose more skin, but not the kiwi unfortunately!

Kiwi are also actively seeking water and reports have come in of kiwi seen in and around creeks, dams and water troughs. Their unfeathered lower legs are well designed for heat loss (or retention) as the arteries and veins lie close together allowing heat exchange between the two. This means standing in the water will help cool the whole body.

Gravid (egg carrying) adult female Northland kiwi have been observed sitting in streams. Whether this is to cool the body or take the weight off their legs is unknown – it’s hard work carrying the world’s largest egg per body size in this heat!

Kiwi will be drinking more than normal now too, to allow for losses in panting, more heat loss in faeces and urine and as their food will contain less moisture.

Hours spent foraging have increased. Data from transmittered wild Northland kiwi shows they are currently active around 10 hours each night, and are venturing out into daylight hours in search of food and moisture, often leaving their burrows before 8.30 pm.

People walking their dogs in the cooler early mornings and evenings are ensuring dogs on leads are extra well controlled to help keep kiwi safe that are venturing out at odd hours. 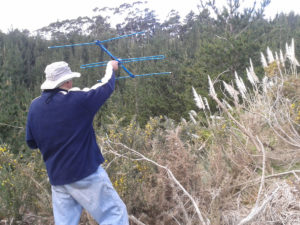 The high activity of the transmittered kiwi also indicates that some Northland kiwi are either not attempting a second nest this season or abandoning it. Marohi, a monitored adult male kiwi on the Tutukaka Coast, is showing signs of abandoning his nest, with his nightly activity rate increasing beyond the 2 -3 hours of foraging incubating kiwi Dad’s usually spend off the nest.  Last year Marohi successfully hatched four chicks, so he know’s what he’s doing and how to survive so he can nest again next season.

But not all kiwi are coping. Scientists currently researching Northland kiwi genetics have also reported some adult males being in very light condition.  Many of the juvenile females found were also in poor body condition and there appeared to be a marked difference between chicks hatched earlier in the season and recent hatches. Older chicks, weighed an average of 900gm and were in fair condition, but younger, smaller chicks were very light. These small, late chicks are at highest risk of predation.

How can we all help as the dry continues? Keep up your good dog control to avoid any kiwi encounters, look after those shaded streams and wetlands and continue your pest control.

A good trapping regime that keeps your forest healthy, ensures there will plenty of leaf litter so that when rain does come, the kiwi will recover their food sources faster and low predator numbers will help those small kiwi chicks survive into adulthood.