You are here: Home / Kiwi Coast News / The Nitty-Gritty on How Kiwi Chicks Hatch

It’s kiwi chick hatching time in Northland – much to the relief of the incubating Dad’s! But have you ever wondered how kiwi chicks hatch? 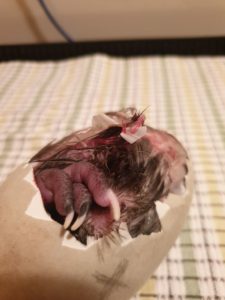 The kiwi Dad’s who’ve been incubating the egg and sitting tight for  70 – 85 nights are starting to feel the eggs move, wiggle and crack beneath them! But there’s a fair bit of work involved and it may up to a week till the kiwi chick finally emerges…

It’s quite a physiologically demanding process for the chick and they’ll take a few rests as they go. Trail cam footage shows that curious Dad will whistle to the hatching egg and even gently tap it with his bill – perhaps to provide encouragement or to nervously check if everything is ok?

The hatching chick responds to this with vigorous movements – “I’m OK Dad, just taking a break, this is hard work!”

So what’s going on inside the egg? At one end of the egg is a small air pocket called the air cell. The kiwi chick pokes his bill into this space, through a membrane, and takes his first breath. Up until then the chick had oxygen provided by the blood vessels formed outside its body and lining the internal shell, a bit like a placenta of mammals.

Once the chick has pierced this membrane (called internal pipping) it takes 2-3 days to crack open the shell with its bill and foot (external pipping). Kiwi do not have an egg tooth like most other birds so have to rely on pushing and kicking to escape from their shell. Sometimes the bill pokes through the shell for several centimetres and  stays like that for several days as the kiwi breathes, pants and gasps. Another good reason to have nostrils at the end of your bill!

As hatching progresses there is a gradual increase in functioning of the chick’s respiratory and cardiovascular systems and the yolk sac is retracted into the body cavity. This is a food store for the young chick for the first few days and is made up of the remaining yolk of the egg. Where this enters their body is their navel, a bit like us!

Kiwi chicks are often a bit sluggish immediately after hatching, it has been really hard work and they look a bit stunned. 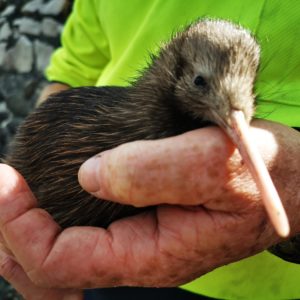 Within days however, they are quite mobile and they will leave the nest within 2 or so weeks as independent kiwi. The large egg and long incubation means the chick is a fully feathered and functioning bird so soon after hatching.

The kiwi Dad and chick have now done their bit and it’s over to us – stoats kill 95% of kiwi chicks before they reach their first birthday unless there is a good predator control program in place. And of course, keeping good control of our dogs keeps kiwi safe so that they can keep breeding and keep those chicks coming…!