Recent reports and photos of daytime kiwi sightings in Northland have been linked to the weather. The dry, hard ground can make it difficult for kiwi to get a decent feed and this can lead them into a bit of trouble as they search for food and also water …

Kiwi mainly eat insects and although some are on the surface in the leaf litter, many are underground and kiwi need to excavate them out with their bill. In soft moist soil this is no problem but Northland’s summer soil is not only incredibly hard but the invertebrates are usually heading deeper into the substrate to keep cool and moist.

“Magic” the kiwi seen out in the day in November. Photo: Puketotara Landcare

“Kiwi are nocturnal, but this lovely big kiwi was out at 2pm this afternoon. That’s unusual. Nothing was happening to disturb it, that we know of. Dry ground can make feeding difficult for them but this one looks in good condition. This one is called “MAGIC” – Magic moment!” 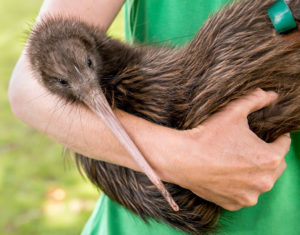 Roha and adult female the kiwi with dirt on her long bill from probing. Photo: Malcolm Pullman

The bill of a kiwi is designed to probe into the soil where they can smell and feel vibrations made by their prey. Adult females have a 30% longer bill than the males and so can reach deeper to get at food others cannot reach but even they struggle in the dry.

Chicks, which are hatching now, are the hardest done by as their bills are only short, relatively soft and they are not all that practised at probing! To make matters worse, Dad, who has been on sitting on 1 or 2 eggs for over 80 days so has probably eaten most of the food in the nest area already. When incubating he may only be off the eggs for 3 or so hours each night , feeding close to the nest. When he is free of nesting duty, he is much more active, feeding for over 12 hours throughout more of his territory.

This could be why kiwi chicks often leave the nest area soon after hatching (they live off the goodness in their yolk sac for the first few days) as they desperately search for food, often in unusual places. They have been found sleeping or wandering in the middle of paddocks during the day where they are at risk from dogs, hawks, cats and mustelids as well as starvation and dehydration. They have been found on people’s lawns, gardens, in ponds and pools.

Reports of kiwi being seen during the day have come in from the Purerua Peninsula and Puketotara Landcare projects in the Bay of Islands, and a sad case of a kiwi drowning in a water trough at Whangarei Heads was reported by Backyard Kiwi. 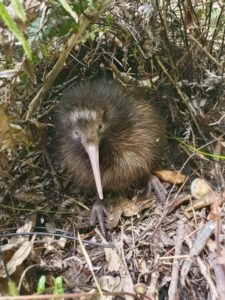 Kiwi chick seen out in the day on the Purerua Peninsula. Photo: Mike Cadogan

Kiwi can swim but not well and they cannot climb up slippery, smooth surfaces. It’s important to keep kiwi safe from water hazards by giving them an escape route (e.g. bricks in a water trough, a plank in a pond) so they can climb out.

With increased daytime sightings of kiwi, we need to work extra hard to keep them safe from pets and ensure all possum traps are raised 750mm off the ground. If conditions worsen regular watering of a small, safe patch of the garden to act as a kiwi feeding zone might be advisable. Do not put food out for kiwi as it can attract unwanted predators.

If you see kiwi out during the day and are concerned, please call DoC for advice (o8ooDOCHOT), contact your local Kiwi Coast Coordinator – Lesley, Andrew or Ngaire; or in the Whangarei Heads area – Todd Hamilton. They might be fine but chicks are very vulnerable and starvation and dehydration are killers. Please do not chase them or pick them up as they stress very easily. If necessary they can be referred to a rehab facility (Whangarei Native Bird Recovery Centre or other approved facilities) for rehydration, feeding and then release into a safe area once they are big enough.