There has been no holiday for animal pests in the Bay of Islands with hundreds of new stoat and rodent traps added into the area over the summer months. 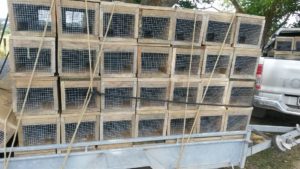 One of the trailer loads of traps heading out…

The new stoat traps are hitting the ground at the perfect time. They will help to counter the unhappy coincidence of Northland brown kiwi chicks hatching at the peak time for juvenile stoats dispersing from their dens.

The traps have already begun catching stoats, providing immediate increased protection to the kiwi chicks. Without intensive trapping 95% of Northland kiwi chicks born in the wild are killed by stoats before their first birthday.

Most of the traps were funded by Northland Regional Council (NRC). The council is contributing through the new Mid North – Bay of Islands High Value Area Pest Control funding introduced in July 2018 and through council’s environment fund. The latter “Bio-fund” grants are available to Northland landowners.

The balance of the traps have been funded by the Kiwi Coast Trust and NZ Kiwi Foundation. 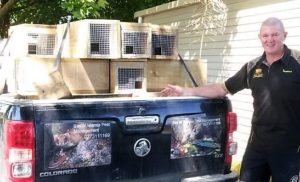 Kiwi Coast’s Mid North Coordinator Andrew Mentor has been kept busy over summer delivering the traps and demonstrating to landowners how to ensure the new equipment catches effectively and safely.

Andrew also helped the community groups through the funding process and worked with the NRC to assist groups design their pest control plans to ensure coordination of effort and maximum chance of success.

Building on the considerable community-led pest control work in the Bay of Islands, the traps have assisted new community projects to get up and running, beefed up some existing project areas to increase trapping densities and connected projects together into continuous trapping areas although operated by different groups.

This coordinated attack on the pest population is designed to help the survival of native wildlife such as kiwi as they roam across the landscapes of Tai Tokerau.

Andrew worked with NRC Biosecurity officer, Mike Knight and the Northern Regional Corrections Facility at Ngawha to design and build hundreds of wooden boxes for stoat and rat traps. 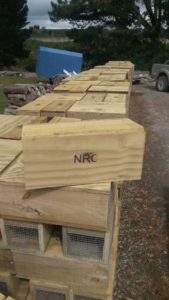 “Making the trap boxes locally in Northland rather than sourcing them elsewhere has saved thousands of dollars and allowed trap boxes to be modified to suit Northland trapper requirements, keeping curious kiwi and weka safe and hopefully catching more predators,” Andrew said.

It had allowed a local community pest control working group to be established to ensure appropriate resources were allocated where needed within the Mid North High Value Pest Control area.

“The increased funding has enabled community groups in areas like the Bay of Islands to substantially increase their pest control work. As a result, more native forests and wildlife are now actively protected and we should have a bumper season of kiwi chicks in 2019,” Kane said.

Andrew explained that The Kiwi Coast Trust and Northland Regional Council had entered into a partnership in September 2017. “It’s great to work together at a very practical level to help communities get the equipment, skills and support needed to actively care for their local areas,” he said. “Seeing the results on-the-ground makes all the hard work worthwhile.”

If you want to get involved in pest control in the Mid North – Bay of Islands area, contact Andrew Mentor the Kiwi Coast Mid North Coordinator.