Koko the kiwi dad has had two successful nests since September and hatched four kiwi chicks over the last six months! 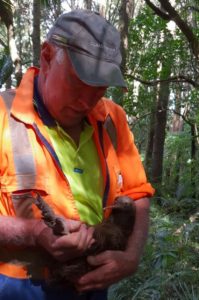 The latest chicks hatched in February and have been named Deko and Niko by the Tanekaha-Hukerenui Kiwi Community Project.  The community-led kiwi project is now entering their sixth year of operation, and are happily seeing the fruits of their labour as kiwi numbers go up and up as a result of dedicated predator control, excellent dog control – and star kiwi dad’s like Koko!

Koko is a monitored kiwi who roams free in the Tanekaha – Hukerenui area. He wears a transmitter on his leg so he can be monitored remotely using specialised equipment. Twice a year he is picked up to be given a health check and ensure his transmitter is functioning properly and not interfering with his life in the wild.

The transmitter sends out data that lets us know where he’s located and things like how long he is active each night. We can use this information to tell when he is nesting and when his eggs hatch as his activity drops while he is sitting on eggs – usually two at a time.

Northland brown kiwi dad’s are the sole incubators of the eggs – Mum’s done enough work laying the largest egg per body size of any bird in the world! However, it’s tough work. The dad’s have to sit on the eggs for almost 3 months! 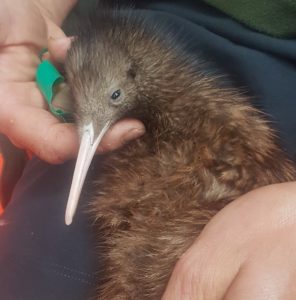 Koko’s chick is fitted with a transponder

Koko’s chicks won’t wear transmitters but instead have been fitted with transponders. These are tiny microchips, each with it’s own unique ID code, that can be “read” by an electronic device to identify the  bird at anytime in the future.

Koko’s chicks have now all left the nest and are roaming free in the Tanekaha-Hukerenui Community’s predator controlled area. Should they ever be encountered again, the microchip will let us know who they are and where they originated.

If you would like to have a close up kiwi encounter, as the Tanekaha-Hukerenui Community Project welcomes and releases new kiwi into their area, come along on Tuesday 26th and be part of a very special evening.