Kiwi Coast’s second Kiwi Listening Blitz has been completed. The report out this week shows kiwi have returned to some Northland sites that were silent five years ago. 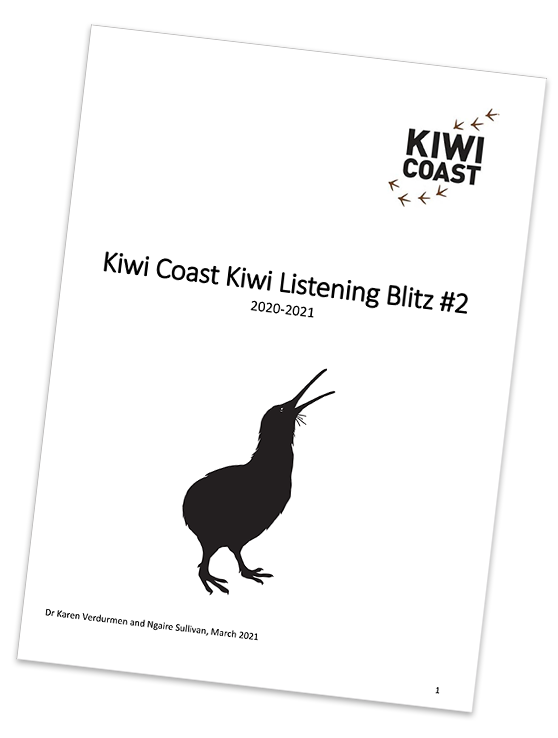 Kiwi Coast carries out a ‘Kiwi Listening Blitz’ using acoustic monitoring devices or Kiwi Listening Devices (KLDs) every five years. This monitoring is designed to track changes in the Northland brown kiwi population and distribution within the Kiwi Coast collective project area over time, with the expectation that kiwi numbers will increase and expand into new areas in response to sustained pest control and improved dog control.

Prior to each survey, Kiwi Coast works with kiwi practitioners, the Department of Conservation and Northland Regional Council to prepare a pre-survey map to assist with targeting sites and fieldwork planning. Kiwi Listening Blitz survey sites are selected according to habitat, land use, ownership, ease of access and to fill the gaps in knowledge of kiwi presence in Northland. Existing human kiwi listening stations that are monitored as part of the annual Northland Kiwi Call Count Survey are excluded, as are known high kiwi density population areas. Data is also collated from KLDs used in Northland within the previous 12 months to avoid unnecessary re-surveying of sites.

During the first Kiwi Listening Blitz in 2016, the Kiwi Coast collective project area was 75,000 hectares.  Fifty-eight sites were surveyed, with kiwi detected at 65% of them. 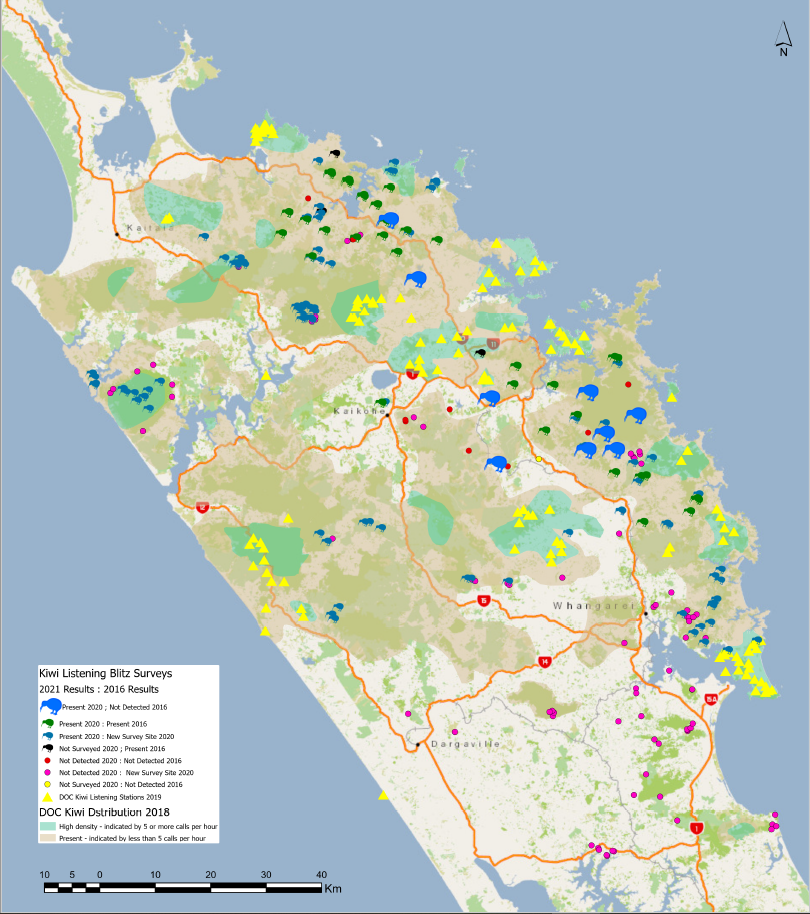 Kiwi Listening Blitz#2 re-surveyed the 2016 sites, as well as an additional 170 sites to investigate the expanded Kiwi Coast project area of 205,000ha at the beginning of the fieldwork in 2020. The fieldwork was led by Dr Karen Verdurmen with early assistance from NorthTec Conservation Management Students.

Excitingly, 50% of sites that did not detect kiwi in 2016 were found to have kiwi in 2021. These results were of great delight to the landowners and communities involved who had been working hard to ‘get kiwi back’.

As shown in the map, the biggest cluster of sites surveyed during the second listening blitz that did not detect kiwi (37 sites) was located in the area between Whangarei and Waipu. The absence of kiwi in this area has been noted since at least 1995 (eg, Miller and Pierce). Hopefully, the growing number of community-led projects in this area will help to restore kiwi to this area in time.

Dr Verdurmen noted the amazing amount of help and assistance received throughout the fieldwork:

“The Kiwi Listening Blitz could not have been completed without the help of many people… Special thanks to all the landowners who welcomed us on to their land, accompanied us to the survey sites, shared their knowledge about the history of the land, kiwi, other wildlife, plants, waterways, many wonderful personal stories, and mostly, their passion for looking after the land. It has genuinely been a privilege meeting you all.”