As we hunker down in our homes during the Covid-19 lock down and try to keep ourselves occupied and safe, we can draw inspiration from our feathered kiwi friends – who are very good at staying in their nests for weeks on end! 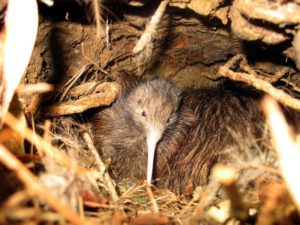 Incubating Northland brown kiwi “Dad’s” stay in their nests, alone, for 60 – 90 nights solid, only getting up for a few hours each night to feed and stretch their legs. Right now data from monitored kiwi shows they are active for around 11 hours each night, feeding up and getting themselves in shape to prepare for the breeding season and nesting duties.

Kiwi nests are much smaller than their roosting burrows – and you may have walked straight past a kiwi nest without ever knowing it!

Lesley says “Nests tend to be smaller than roosts and most are well hidden. Some kiwi Dad’s go to extraordinary lengths to disguise their nests, spending 20 minutes or more placing sticks and foliage across the nest entrance when he leaves to feed for the night. He also pulls foliage and sticks into the nest when he returns to protect the entrance.”

“Others have a shallow nest which barely covers them when they are sitting on their eggs. Some have an entrance on top while others have elaborate entrances and twisting tunnels so you can not see in. Generally they are a single, smaller entrance with some type of tunnel and the nest site at the end.”

“Some nests are so small you wonder how a gravid (egg carrying) female gets in there! In the Far North, hollow puriri logs would probably be where we find most nests.” 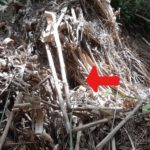 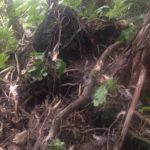 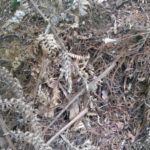 “We find kiwi in a wide variety of places – including hollow logs, pampas bushes, Gahnia, holes in rock faces, upturned tree roots, ditches and drains, culvert pipes – basically anywhere they can find a bit of shelter for the day!.

“Kiwi dig their burrows out with their strong legs and sharp claws. Once made these burrows will be used on and off for years and they will have multiple roost sites they use throughout their territory.” 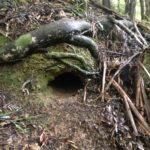 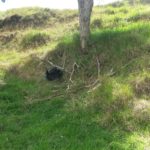 Can you spot the burrow? (black object is a bag) (Photo: Rolf Fuchs) 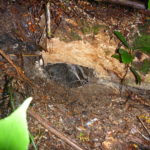 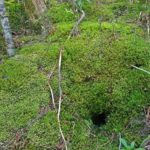 Lesley says “Some make a real effort to hide, others not so much. Some seem to get a surprise the sun is coming up and just stick their head into some foliage, a bit like a young child playing hide and seek – if I can not see you, you can not see me.”

“Others can be 10 metres up a hollow puriri log. Most are sheltered under foliage or tree roots and fallen branches. Adult females especially seem to be more likely to be on the surface rather than deeper in holes. Chicks are often in foliage like wiwi or gahnia.”

“Generally, roosting burrows are quite roomy and can have multiple entrances. There have been stories of kiwi sharing a burrow with a possum for the day and we have often found multiple birds in a burrow. They are not always a pair, sometimes two females possibly Mum and a subadult daughter.”

These day roosts can be used for many days or in regular intervals while other sites are just used every now and then depending on food supply and kiwi density.

“Kiwi are survivors and have shown themselves to be adaptable. Nests have been found under upturned wheelbarrows in people’s backyards! Roosts can be in a drain on the side of the road, under some gahnia or under the bulb of a dead nikau frond. If you live in Northland, never assume kiwi are deep in a hole in the bush – they can be anywhere.”