You are here: Home / Pateke / Northland Pāteke Dip Due to Drought?

Pāteke, the rarest mainland duck in New Zealand, are flourishing on Northland’s east coast. However, the 2022 Flock Count shows there has been a dip in numbers.

Pāteke / brown teal congregating at flock sites on Northland’s east coast have been counted annually each February since 1988. Comparing the data over time has shown an overall upward population trend for the region since 2002.

Kiwi Coast works each year with community groups, specialist staff at the Department of Conservation (DOC), the Pāteke Recovery Group and NorthTec to assist with the Annual Northland Pāteke Flock Counts and investigate new sites.

Analysis of the 2022 data confirms that while pāteke continue to flourish in eastern Northland, the number of ducks counted this year has decreased.

Pāteke have particular relevance to Kiwi Coast because they are even more vulnerable to the same cartel of predators that send kiwi into decline.  It could be said, where pāteke survive, kiwi thrive!

The headline graph, courtesy of Nigel Miller of the Whangarei DOC office highlights the pattern of the pāteke flock site counts in Northland from 1988 to 2022. While pāteke are clearly doing well, the numbers have dipped with 595 counted in 2022, down from 661 in 2021, and 704 in 2020. 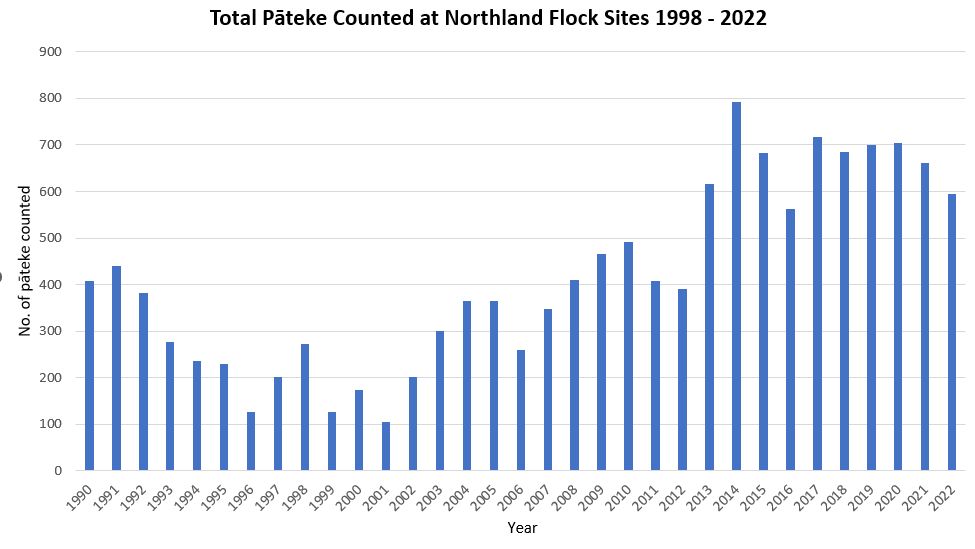 This could well reflect the impact of the two previous summer droughts, as water conditions effect the number of birds that congregrate at flock sites each year.

During a dry summer, smaller waterways and ponds often dry up. Pāteke are then more likely to congregrate at the known flock sites that have large, reliable water sources – espcially the young and unattached birds, chased away from their natal ponds by the dominant parents.

Conversely, during wet summers, more plentiful water and food supplies enable the ducks to hang out in the lesser water sources and the young may not fly into the flock sites. Also, pāteke are both cryptic and nocturnal, so the flock count numbers only ever give a best estimate.

With increased dry years one of the likely impacts of climate change in Northland, waterways and wetlands will become even more crucial for the survival of  native wildlife such as pāteke.

A traditional flock site such as Mimiwhangata has probably seen their flock count peak some years ago, with young birds flying out to find new territory.  The lucky ones will settle in the safe sanctuary provided by sustained predator control. With the amount of predator control expanding each year in Northland, thanks in the main to the initiative, passion and drive of community groups, supported by Kiwi Coast with funding from the NRC, the likelihood of this happening is also increasing. The not so lucky will fail to survive in the absence of any trapping at their final destination.

Successful releases of pāteke between 2005 and 2011 with Tutukaka Landcare  led to the recent establishment of viable flock sites round Ngunguru. Natural expansion has also occured south onto suitable ponds and wetlands at Pataua North, again thanks to the presence of high quality, privately funded predator control at a large scale.

As numbers build in the vicinity of these flock sites, further dispersal is anticipated, particularly into the river catchments and estuaries at Ngunguru, Horahora, Pataua and Whangarei Harbour.  The 60,000 hectare ‘Predator Suppression Zone’ boosted by Predator Free Whangarei should significantly aid this process.

Ultimately their survival will depend the on suppression or elimination of mustelids and feral cats and the protection of waterways and wetlands. Continued annual flock counts will track the success of these measures in time.