Fred and Graham – two transmitter wearing wild kiwi monitored by the Mahinepua-Radar Hill Landcare Group recently passed a health check with flying colours despite the drought. Sustained pest control by the landcare group is thought to have helped them beat the odds. 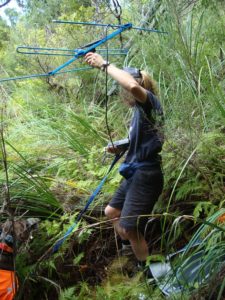 Fred and Graham are two transmitter wearing adult male kiwi that live in the core of Mahinepua Radar Hill Landcare’s predator control network. We have followed these kiwi for several years now and they have proved to be a successful way of engaging people across the Mid and Far North in kiwi conservation with their movements, nesting attempts and survival through events such as summer droughts.

Fred and Graham both had successful nests last season. Fred got his nest over and done with early in the season and his chicks were seen on trail camera footage.

Graham had an early nest that failed and then re-nested later in drier conditions.

Graham’s second nest had two fertile eggs and the first hatched successfully.  Unfortunately, the second chick died while trying to hatch, which may have been related to the dry, hot conditions we experienced.

This autumn both Fred and Graham received new transmitters and had a health check. Both kiwi were in really good condition despite the dry season – which was great to see and a bit of a surprise considering the reports of kiwi struggling through the drought elsewhere.

Mahinepua Landcare have carried out landscape scale pest control for almost two decades. By controlling possums and rats (as well as the mustelids and feral cats that threaten kiwi) their forests have been able to hold on in the dry conditions with a deep leaf litter layer retaining moisture for trees and insects. Their waterways never ran dry which allowed their kiwi to remain in their territories with sufficient water and feed. Good dog control in the area has allowed these birds to remain safe too. 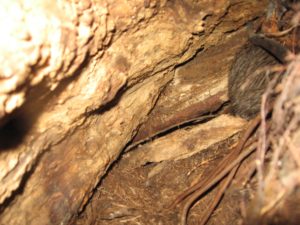 Can you spot camera-shy Graham in his burrow?

Kiwi transmitters allow us to know what our local kiwi are doing through the year. They tell us how long birds are out feeding for (for 13 hours over the drought) and what time they are leaving their burrows at night (well before sundown in the drought) as well as vital nesting information.

It is interesting to monitor how these parameters change with the seasons as well as between years. We can then see how kiwi cope with events such as droughts. With transmitters, kiwi can be tracked as they move territories or disperse into neighbouring safe areas. You’d be surprised how far some kiwi will travel when it is safe for them to do so…

Fred and Graham are quite famous and have their own You Tube video  – you can find out more about Mahinepua Radar Hills Landcare and their monitoring here.