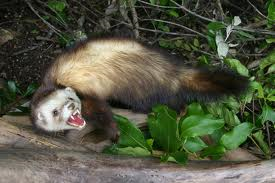 Ferrets pose huge risks to kiwi. Being the largest type of mustelid in New Zealand, they are capable of killing not only kiwi chicks, but also the adults.

There have been some devastating accounts of ferrets destroying large numbers of kiwi in very short time frames.  For example twelve kiwi were killed by 1 or 2 ferrets at Pukaha Mount Bruce in just one week in 2010.

So when a ferret was reported on Mt Tiger Road last week, Whareora Landcare were quick to respond. Extra traps have been deployed and fresh rabbit baits are being changed daily for two weeks in an effort to catch this predator ranging so close to one of their known kiwi sites.

Northland does not appear to have as many ferrets as other places (such as the South Island), but they are still present. It could be easy for Northland kiwi recovery projects to forget ferrets even pose a risk, especially if they are not being caught in traps very often.  In the Kiwi Coast 2013 Annual Pest Results Tally  that summarised data from 32 projects, just 1 ferret was caught.

However, scientific trials have shown that ferrets are able to extract themselves from DOC 200 traps. If groups are not using either the bigger DOC 250 trap or MK VI Fenn traps, they may simply not have the right traps out there.

For more information on ferrets and what traps to use to catch them check out the Northland Pest Control Guidelines or visit the DOC website.