Analysis of the 2018 Annual Pateke Flock Count data has confirmed that pateke, or brown teal, are flourishing on the Kiwi Coast. The survey recorded the third highest flock count on record and birds counted at new sites showed their distribution continues to expand through eastern Northland.

Each year from 2014 – 2018 the Kiwi Coast Trust has worked with community groups, specialist staff at the Department of Conservation (DOC) and NorthTec to help coordinate the Annual Pateke Flock Counts between the Bay of Islands and Ngunguru and investigate new sites.

The data collected shows the rare ducks continue to flourish in eastern Northland: 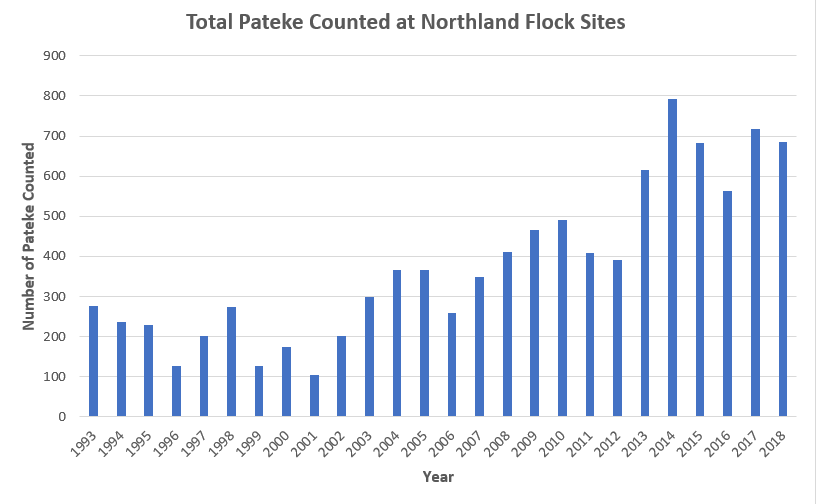 In June 2013, Dr Richard Maloney, Science Advisor to the Pateke Recovery Group, commented that the pateke recovery programme, in terms of the captive bred birds consistently produced and released back into the wild, and in turn surviving, albeit in the presence of continuing predator control programmes, is truly a leader in species recovery in N.Z.

Mike Camm, the community representative on the national Pateke Recovery Group and coordinator of the Tutukaka Landcare Coalition says:

“This beautiful little brown duck has now established a permanent niche on the north eastern coast of Northland from Mimiwhangata to Pataua North, and is spreading its wings, to colonise other areas where, thanks to all the predator control work taking place for the protection and enhancement of kiwi populations, it’s safe for them to set up camp.

Pateke flock counts in what was a very wet February surprised us with reasonable numbers showing up on the flock sites.  In dry seasons we see more birds. During wet years they tend to stay put.

Around Tutukaka we counted 130 birds at 5 sites, and we’re aware of probably double that number on small ponds and in wetlands and streams spread round the district.

In all we look to have reasonably stable populations at sites stretching from Purerua Peninsular, on the northern side of the Bay of Islands down to Pataua North, with reports of birds showing up west of Whangarei and Waipu.

Pateke, like kiwi suffer from the same cartel of  predators:  stoats, ferrets, feral cats, stray dogs, and poorly aimed cars, to name the worst offenders. Unlike kiwi, even though they are nocturnal browsers, they spend much of their day standing about on one leg at the edge of a pond.  It has been said that: “ if Pateke survive, kiwi will thrive”, so for all of us on the Kiwi Coast, living within an ever expanding zone of predator trapping, the presence of these little fellas is another useful indicator, and  excellent example of the benefits of large scale landscape trapping.”

The Annual Pateke Flock Counts take place in Northland in February each year. The dates for 2019 have yet to be set. To get involved in counting pateke in the Bay of Islands contact Andrew Mentor, the Mid North Coordinator or for other areas in Northland contact Ngaire the Kiwi Coast Coordinator.