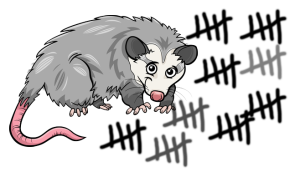 The grand tally of 36,040 animal pests shows the sheer hard work being put in by an ever-growing range of projects and people along the Kiwi Coast with the common goal of reducing the impacts of introduced predators and helping native wildlife to thrive.  A total area of 71,758 hectares are now actively looked after with traps or toxins along the Kiwi Coast.

View a graphic of this summary…

The tally of 16,386 rats will be much lower than the true number of rats removed from the Kiwi Coast in 2014 as most community-led conservation projects use poison to successfully control rats to low numbers, rather than rely on rat traps alone.  The high rat numbers mirror the surge in rat population experienced in the South Island in 2014 in response to a heavy fruiting season of many native trees, creating an abundant food source.

As stoats kill 95% of baby kiwi before they reach one year old, removing 864 stoats from the Kiwi Coast in one year will also help Northland brown kiwi to survive. The Department of Conservation’s Northland Kiwi Call Count report for 2014 showed that there has been a corresponding increase in kiwi populations along Northlands’ east coast where animal pests are controlled to low levels.

Ngaire Tyson, Coordinator of the Kiwi Coast, expressed a huge thank you to all the people and projects involved in animal pest control.

“Thanks to each and everyone of you for all the hard work you do. Results like this are proof that when we all work together, we can make a real difference. Our wildlife, forests, streams, wetlands, and dunes are undeniably so much better off without those 36,040 pests out there eating our native birds and munching their way through our native forests night after night”.