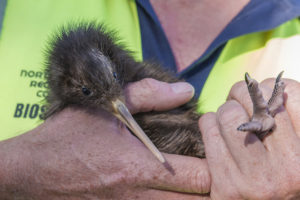 A kiwi chick has been named Waimarie –  meaning “lucky” –  and returned to it’s home on the Tutukaka Coast after being rescued as an egg from prying stoats and hatching successfully at the Whangarei Native Bird Recovery Centre.

It all started with Marohi, one of the kiwi dad’s in the Kiwi Coast ‘Follow a Kiwi’ program monitored by Tutukaka Landcare. Marohi had successfully hatched his first chick and was sitting on a second egg when a storm destroyed his nest.

He had chosen to build his nest in a stack of pampas and pine needles and – like the wicked wolf of storybooks – the wind simply blew it all away. This left the dedicated dad sitting out in the open, incubating his egg.

Tutukaka Landcare set up a trail cam to track his progress and were horrified to see a stoat approach and sniff Marohi as he sat on the nest, then disappear:

With a second storm brewing, and fears that the stoat may return, kiwi expert Pete Graham was called in to advise. 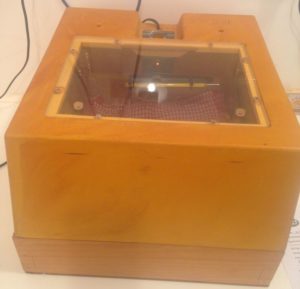 Waimarie the kiwi chick in the incubator

It was decided that Marohi was too vulnerable sitting out the open with another big storm brewing, and the stoat was likely to predate the chick as soon as it hatched. Pete ‘scooped’ the egg, removing it from under Marohi. To Pete’s surprise the egg was ‘pipping’ which means it was starting to hatch! It was quickly delivered to Robert Webb to be put into the Whangarei Native Bird Recovery Centre’s (WNBRC) incubator and at 5.45pm that day – Marohi’s second chick was born!

The chick was named ‘Waimarie’ (which means ‘lucky’ in Te Reo Maori) in honour of his/her adventurous start to life!

Kiwi chicks lose weight after hatching, and so Waimarie had to stay in the care of WNBRC until the chick regained his/her hatch weight. The weight of the chick and egg before hatching was 351.3g. Waimarie was released weighing 349g back into Tutukaka Landcare’s predator controlled area, where the chick will fend for itself – just like other Northland brown kiwi chicks of a similar age do.

Waimarie’s dad, Marohi, continues to be monitored and has remained in the same area where hopefully he will continue to hatch many more kiwi chicks, all though next time, with a little less drama we hope! 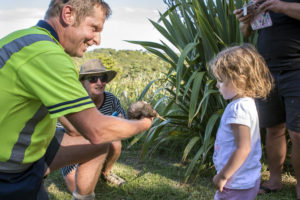 Pete Graham shows Waimarie to a young kiwi fan before releasing it back into the wild. Photo: Malcolm Pullman