Specialist Kiwi Conservation Dog, Yagi, and her handler Lesley Baigent have been in hot demand over the last month!

Northland projects sometimes need a helping hand (or nose) to sniff out that extra kiwi info that call counts alone do not always tell us. Our ears may tell us there is a kiwi out there somewhere in the night, but a dog’s nose knows a whole lot more…

Certified Kiwi Conservation Dogs have been around for many years and we are blessed to have a few teams in Northland. They are highly specialised dogs that have undergone rigorous training and testing for years as part of Department of Conservation’s elite ‘Conservation Dog’ Programme’. This programme comprises of handlers and their dogs, trained as dynamic duos to seek everything from predators that have invaded pest-free sanctuaries, to Argentine ants at wharves and even Kauri Dieback Disease in kauri forests.

Kiwi Conservation Dogs are trained to safely and passively indicate where kiwi are present.

This means they work closely with their handler to indicate where kiwi are from a short distance away using their powerful sense of smell, without ever actually coming into contact with the kiwi.

It’s this last part that is essential. Due to that powerful sense of smell, and the fact that kiwi are usually quite highly scented themselves due to their high protein diet, smelly uropygial glands and burrow-living lifestyle, most dogs can easily find kiwi. However, too often this has unfortunate consequences, as their next instinct is to investigate this interestingly smelling creature further by flushing, chasing and grabbing, or picking it up in their mouths, which is almost always fatal.

Training a dog to find kiwi safely is the challenge. It takes years of training, and not all dog’s pass.

Even those that do are worked at a close distance and are muzzled at all times. There is also only a short window each year when we can do this work (January – May), to ensure kiwi are not handled or disturbed during the mating and breeding season. 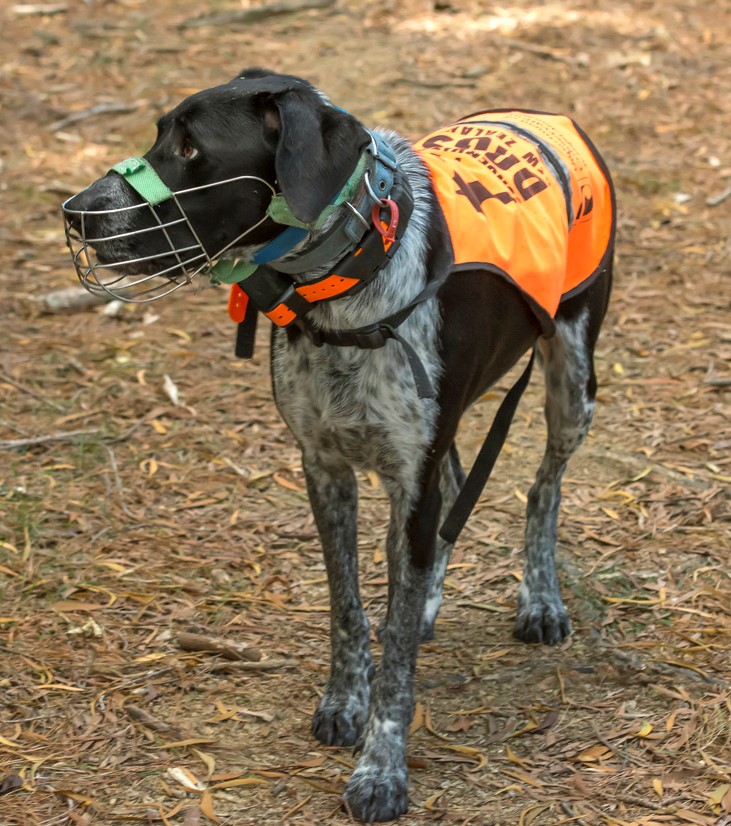 There are several ways dogs are trained to indicate kiwi presence – either by “pointing” – stopping and “locking on” – their whole body, tense and rigid, pointing their muzzle and looking intently where the kiwi is, all the way through to calmly sitting and casually looking in the direction of the kiwi’s location. The method is determined by the natural instincts of the breed and personality of the dog. The handler needs to be able to read their dog’s every movement and quirk of behaviour to understand what their dog is telling them.

Yagi’s kiwi-finding mode is of the cruisy variety. She’ll progressively slow down as she gets closer to the kiwi, then stop and get a really good nose full of  scent to poinpoint where the bird is hiding. She will usually be metres away from the kiwi, unless it is hiding underground or down a log. In that case she will go to the entrance hole of the log and indicate kiwi presence. Then it’s time for a treat – Good girl Yagi!! and we move away so that the lesser-nosed humans can investigate further to perhaps handle the kiwi to fit a transmitter or carry out a health check/breeding assessment.

There are many ways these Kiwi Conservation Dogs can be used to give us meaningful data on the kiwi in Northland.

Recently two dog teams conducted a survey of kiwi in Pukenui forest. Yagi and I were the Northland team and the other team was from Whakatane (having just starred on Dog Squad – check out Bridget and Aria!). For five days the teams worked in with the Pukenui Western Hills Forest Trust to cover as much ground as they could to detect kiwi, poo, burrows and trails.

What we learn from watching these remarkable sniffers is not just where kiwi are sleeping. They will show us which habitat they prefer at different times of the year and in varying climates They will indicate on all ages of kiwi showing us if kiwi are breeding and if young are surviving, unlike call count monitoring which just detects older birds as kiwi do not start calling until 2 – 3 years of age. They will show us how many kiwi there are in an area by indicating trails, not just by finding birds. We also see where they are feeding and what they are feeding on.

Lately the dogs are being used more for indicating kiwi presence where they may be at risk, for example if an area is to be mowed or mulched, trees are to be felled or heavy equipment is to be used.

A quick check with the dog puts contractor’s minds at rest. No one wants to run one over or have one under the mower! 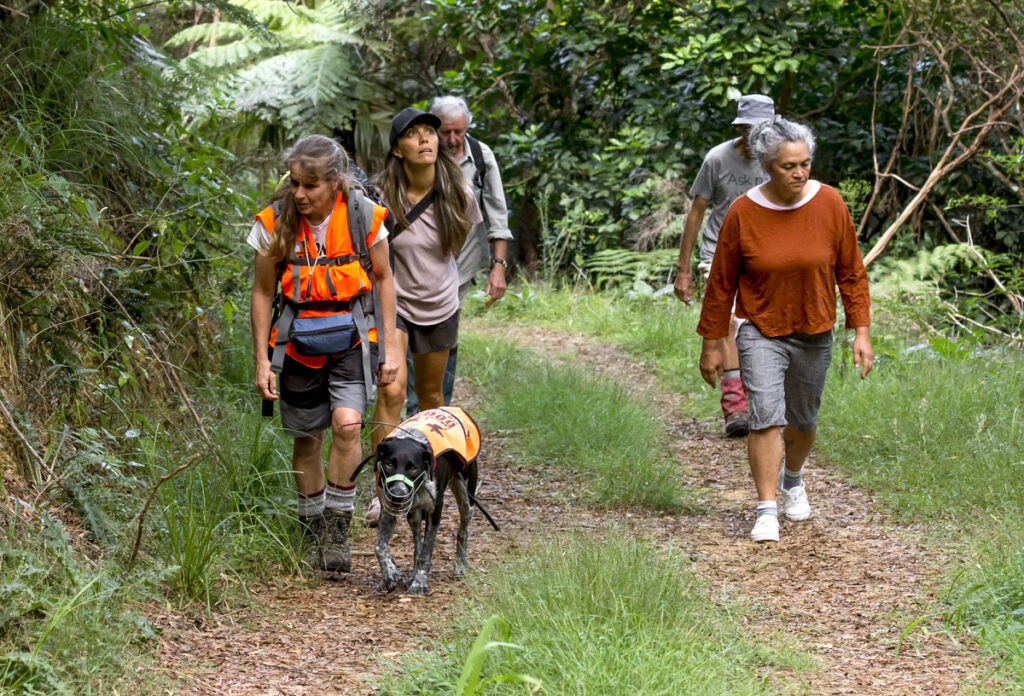 Lesley and Yagi checking the roads for kiwi scent at with Tutukaka Landcare. Photo Malcolm Pullman

For instance, working with the Tutukaka Landcare Coalition (TLC), Yagi recently assisted with checking the roadways for kiwi before heavy machinery was brought in to a soon-to-be-harvested pine plantation. She also picked up on the trail of a transmitter-wearing kiwi called Mango.

Released onto the Tutukaka Coast last year, Mango has been having quite the adventure exploring the 11,000ha+ predator controlled area. Knowing Mango’s whereabouts over months of tracking showed how much he had been moving around within the pine forest, and the area and habitat type he preferred.  TLC will keep a close eye on his movements and work in with the logging contractor to ensure his safety.

Dogs often get a bad rap in the conservation world but there are a few amazing teams doing vital, safe work of great benefit to conservation projects. If your project needs a nose/hand, get in touch with Lesley and we can talk it through, discuss options and check any necessary permit requirements.