Increasingly intensive pest control by Piroa-Brynderwyns Landcare is reaping rewards for native forests and wildlife over a 25,000 ha area between Bream Tail, Waipu Cove and Marunui. 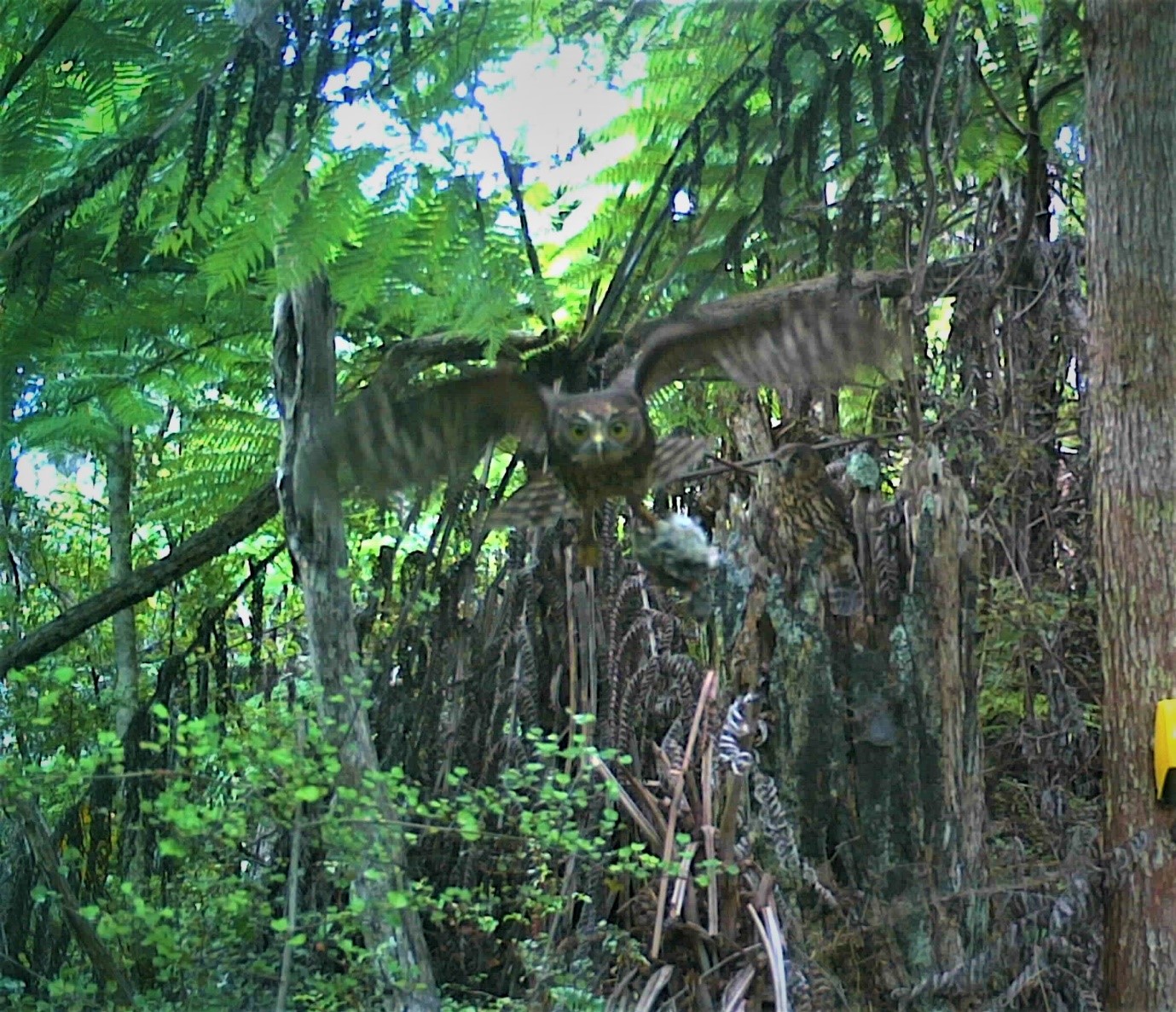 Kiwi were observed in several new locations in 2021 and other rare species including Hochstetter’s Frogs, kākā and koromiko/bellbird were also seen or recorded. More common species such as ruru/morepork are also benefitting from the sustained pest control, with a nest recently successfully hatching two fledglings despite some all too familiar night time prowlers.

The amount of community work going into Piroa Brynderwyns Landcare (PBL) is staggering.

PBL Co-chair Peter Hunt says: “Over the last six months alone, the value of unpaid labour has already topped $1.5m! Thanks to everyone who is helping to make Piroa-Brynderwyns a better place for birds, frogs, bats and for people to live and enjoy, from the hills to the sea.  It’s great working with such a wonderful team.”

Local Kathryn Clark walks through the Langs Beach Scenic Reserve almost daily checking the trap network that she has set up.  In mid-November she noticed a ruru emerging from a hollow tree stump beside one of the tracks and realised it was protecting a nest with two eggs.  Given its proximity to the track and that the ruru could be disturbed every time someone walked past, the Wairahi Tracks Charitable Trust, immediately closed the track to give them some space and peace.  Kathryn set up a trail camera to keep watch on activity around the nest.

Kathryn says “The chicks hatched late November – two white balls of fluff. It was amazing viewing the video clips to see how busy the parent birds were gathering enough food.  Imagine the horror in early December when the camera captured a possum climbing onto the stump to have a good look at the nest before getting dive-bombed by the ruru.  After setting up traps around the nest three days later the possum was caught at the base of the stump. The nest has since been visited by a rat, which is still on the loose, but another inquisitive possum also appeared and has since been caught.”

“The chicks are growing fast and have now begun to get their second down of darker feathers.  We’d like to think that our trapping programme over the last year together with the specific protection efforts over the last month around the nest will help these chicks to thrive as may other fauna due to the reduced predator numbers in the PBL area.” 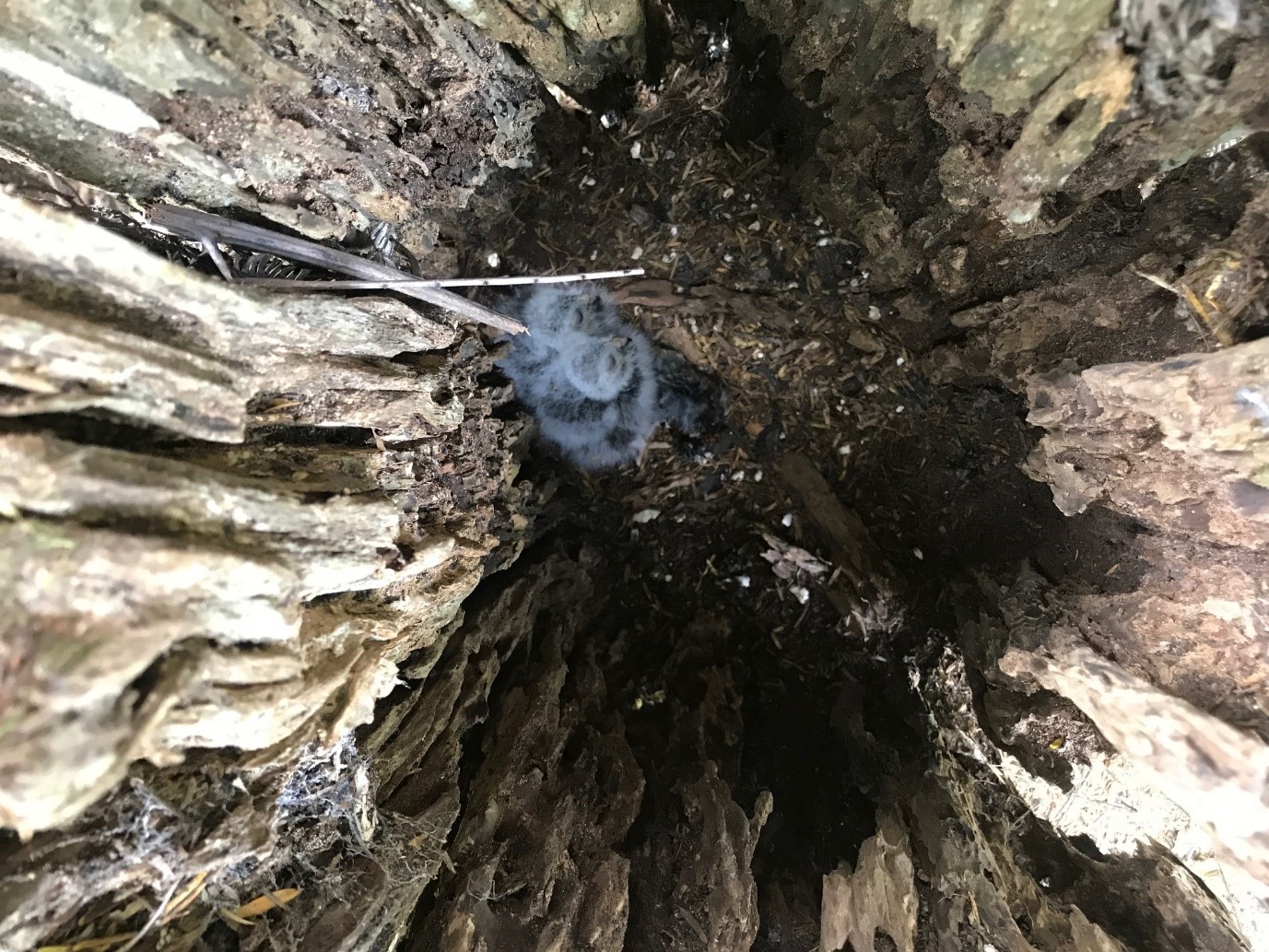 Pleased with the results to date, Piroa-Brynderwyns Landcare are keen to take it to the next level and have begun setting up Piroa Conservation Trust (PCT).

PBL Co-chair Ann Neill explains: “PBL has been operating as a semi-formal steering group for the past four years. During this time the activities have moved from a pest animal and trapping focus to other conservation outcomes including pest plant control, education and wider biodiversity. Growth in local community groups has gone from an original 6 to 30+ that vary enormously in size and complexity of the work that they are doing. Pivotal to the formation of a new trust is the intent to work in partnership with iwi/hapū – Te Uri o Hau and Patuharakeke.

“We’ve recently worked with ecologist Amy Bazeley to complete a 10 Year Ecology Report and develop a vision and add healthy ecosystems and water objectives to the existing focus on pest animals and plants.: The vision for PCT is proposed as:

Te Ao Turoa: Nature-People Flourishing Together – Ki Uta ki Tai from the hills to the sea

This vision has been deliberately kept broad. The objectives of the trust drill more specifically into the outcomes sought in the PBL high value area and are underpinned by the 5-year management plan and the recent ecology report with its 10 year roadmap.

You can keep up to date with the latest Piroa-Brynderwyns Landcare news and events on their new website and Facebook page.