Exciting news from Taheke Landcare – a family of rare pateke ducks have been found in the area for the first time for many years.

Ian Page  – Coordinator of the Taheke Landcare Group near Pataua North says “This spring has seen some great results for the Taheke Land Care group.  Six pateke ducklings are being raised by their parents on a small pond.

We have never seen these birds in the valley before and we have been here since 1978.” 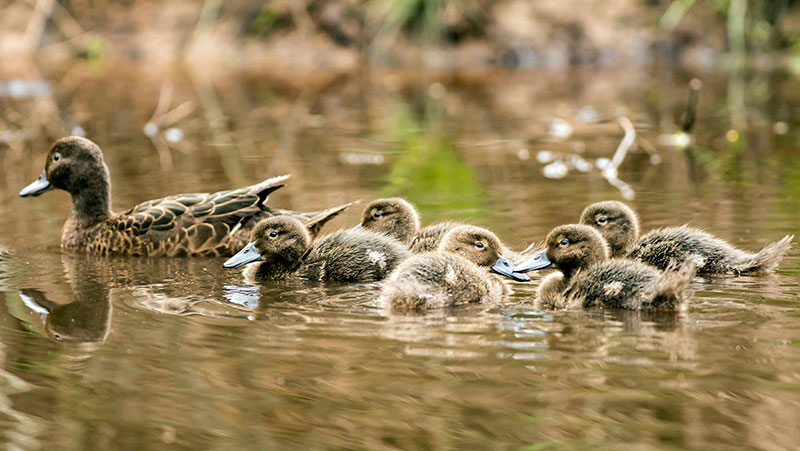 Pateke, or brown teal, are the fourth most endangered duck in the world. Once a widespread and common duck in New Zealand, their numbers have dwindled alarmingly as a result of habitat destruction and predation.

The pateke on Northlands east coast are of special interest as they are wild born pateke that have returned to the area after being locally extinct for many years. Kiwi Coast reported in 2015  that pateke appear to be increasing on Northland’s east coast as predator control expands.

Ian thinks that there are a couple of things that might have allowed these rare native ducks to breed successfully. The first is two years of intensive predator control over the Taheke Land Care area, funded by the Kiwi Coast which has seen the demise of 80 stoats, 57 weasels and 18 feral cats.  The second is the first year of a 3 year programme to eradicate Glyceria sweet grass from the upper Taheke catchment assisted by the Northland Regional Council.  This project has seen an increase in the open water available along and beside the river, protected by rapid colonisation of much of the banks by native wetland species.

Ian Page says “It makes all the hard work worthwhile!”

The pond is on the edge of the Page family farm which is protected by a 161 hectare QEII National Trust covenant.

Pateke Recovery Group Leader, Nigel Miller, reported that there used to be a flock of pateke in the Ngunguru estuary, north of Taheke around 40 years ago.

Nigel says “A pateke population is starting to take hold to the south of Ngunguru. With quality predator control hopefully the population will continue to expand. People should keep an eye out for a male pateke on their pond – their could just be a female sitting on a nest nearby”.

“We are hoping that pateke will re-establish a summertime flocking site on Northland’s east coast.” Anyone seeing a group of pateke over summer should contact Nigel at the Department of Conservation.