Milo and Ko Marohi the kiwi have been having great adventures on the Tutukaka Coast since being released in late November on the Bowden’s family farm at Matapouri.

As both kiwi have transmitters on their legs, their movements have been able to be tracked and mapped as they explore their new home. Locals Sandra and Guy Bowden, Nan and Malcolm Pullman and Mike and Jane Camm have been tracking the kiwi using the telemetry equipment with surprising results.

This article is based on updates shared by the Tutukaka Landcare Coalition since the kiwi release.

Milo and Ko Marohi have captured the hearts and minds of Tutukaka locals ever since their release at Tawapou Farm on November 18th in front of over 150 enthralled kiwi fans. However, despite being released into custom-built created burrows with stunning ocean views by accredited kiwi handler Todd Hamilton, the two juvenile kiwi decided to go on a coastal walkabout rather than settle in to their new homes.

Following the signals from transmitters attached their legs,  Mike Camm from the Tutukaka Landcare Coalition was initially surprised – and a little nervous – to see the two kiwi venture out from their carefully selected release sites.

Mike says “Initially I was fearful to see Milo and Ko Marohi wander further and further from the Bowden’s predator controlled dog-free farm, but with the great support of local landowners, the wider 10,000ha of predator control managed by Tutukaka Landcare and excellent dog owners it’s clear the kiwi are able to roam safely”. 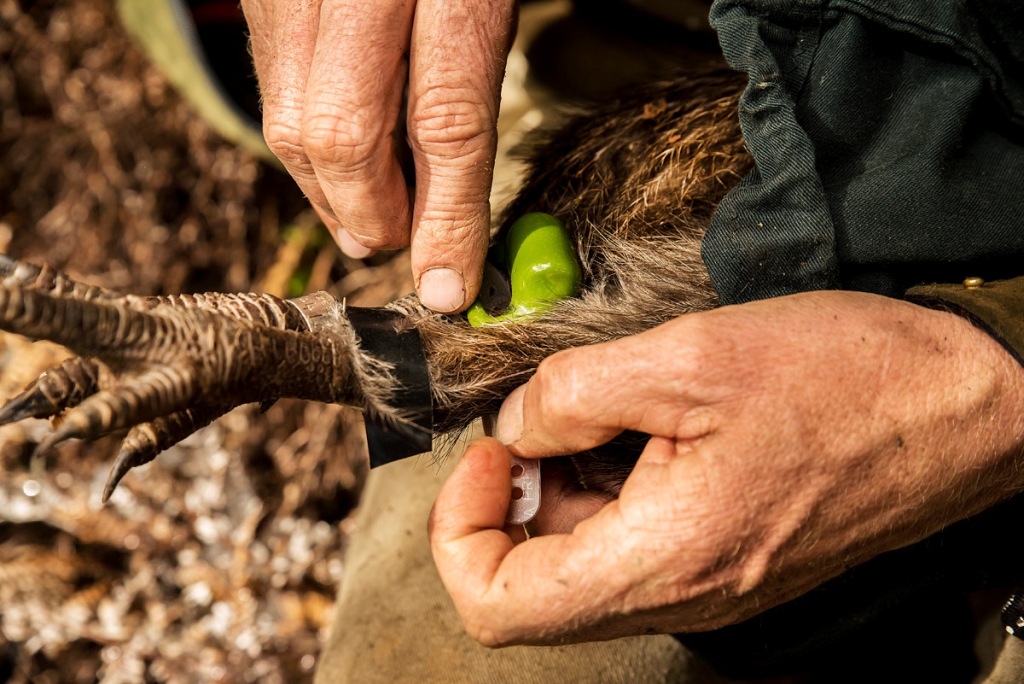 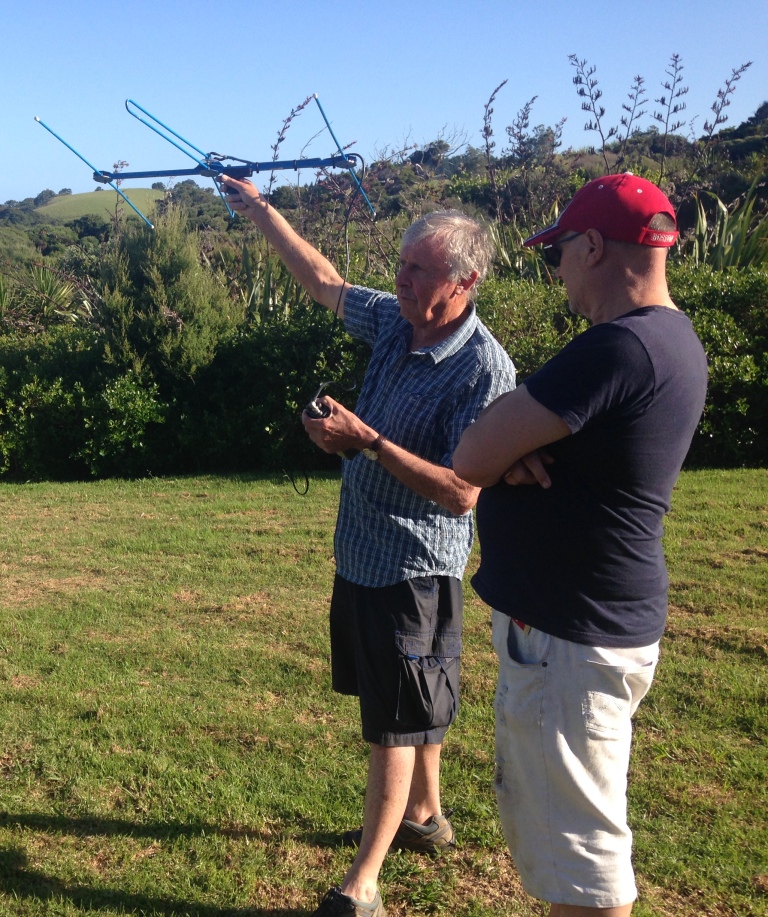 Nan Pullman from Sandy Bay Kiwi provided this update  and map 10 days after the release:

“Ko Marohi spent the first 10 days moving backwards and forwards between nests located in thick swards of kikuyu on the edge of the road next to Matapouri Lodge’s gum plantation and an east facing hillside covered in long grass and bracken. Today he was found in new territory over near North Gable on the edges of a coastal wetland. It was, after all, a perfect day to be out on the Tutukaka Coast.

Milo on the other hand has been checking out a native forest remnant in a deep gully for the past four days after walking all the way up the North Gable Way valley. He made a few people very nervous as he got closer and closer to Matapouri Road. We know he must have walked past a few mature kiwi in that valley, because we saw their larger footprints and feeding probe holes when we tracked Milo’s meanderings during the week. Perhaps he met some of this year’s local kiwi chicks as well because they are likely to wandering around too.  Lots of locals would have been really happy for Milo to settle down in their special valley but this young lad likes exploring and so on he goes.” 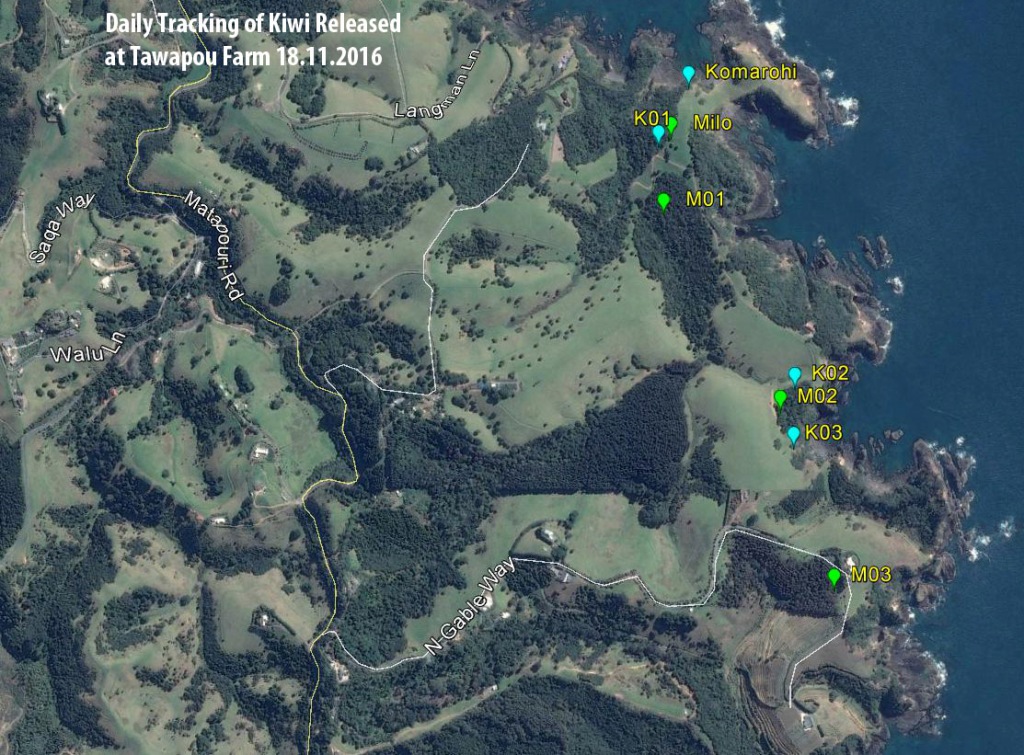 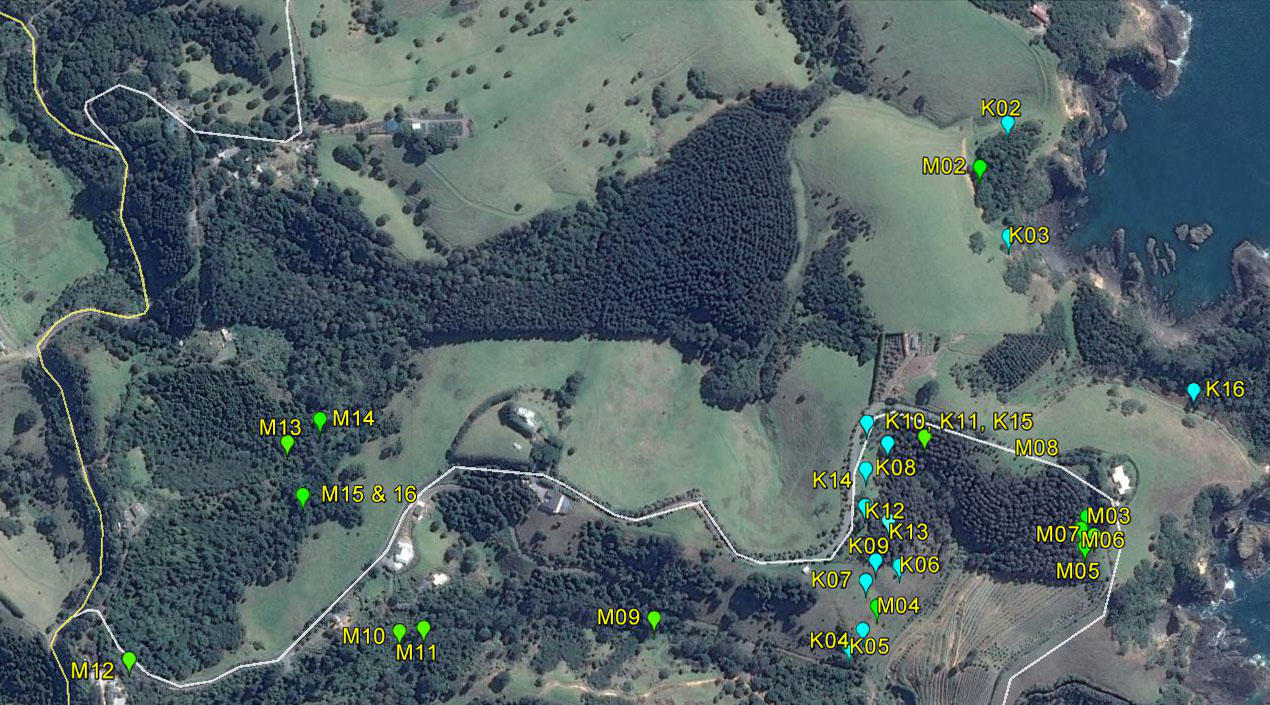 These two juvenile kiwi chicks have now walked a considerable distance zig-zagging up and down the Tutukaka Coast.

Mike Camm offered a huge thanks to all the dog owners on the Tutukaka Coast:

“A huge thanks to all the landowners for being wonderful dog owners – walking their dogs on leads and keeping them tied up, especially at night. Responsible dog owners are the key to thriving kiwi on our coast and it’s great to all be working together to achieve this.”

Currently both kiwi have walked a little bit further south. Ko marohi ventured down the gully past Sailfish Winery and up over Middle Ridge to check out the vista from Rocky Bay for a few days. He then headed north for a few nights, nestling in amongst John and Carolyn’s native plantings. Milo is taking the high road out of North Gable. He dropped down into mature native bush and gullies filled with small wetlands before resting at the head of a gully on Middle Ridge in amongst regenerating native shrubs.

At one point there was a suggestion that Ko Marohi may be at Schnappa Rock in time for Xmas lunch if he kept heading south at this pace!

The question now is – where will the two kiwi choose to set up their home burrow? Tutukaka locals have been excited when told the kiwi are on, or near, their properties, each hoping that they will move in as permanent residents, but have needed to simply wish them well as they’ve continued on their journey’s each night.

To keep up to date with Milo and Ko Marohi’s adventures keep an eye on the Tutukaka Landcare and Tawapou Coastal Natives Nursery websites.