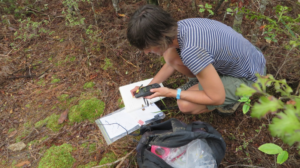 Thalia says:  “These KLDs are passive automated devices programmed to record kiwi calls at night when kiwi are active.  The KLDs were set out using a standardised protocol to record calls of any kiwi present”.

Combining information from the KLD’s with data from ‘human listening stations’ will establish where kiwi can currently be detected along the entire the Kiwi Coast. As predator control continues, kiwi populations should increase and expand.

Repeating the Kiwi Listening Blitz every five years will assist the Kiwi Coast to monitor these changes over time and track kiwi moving into new areas. 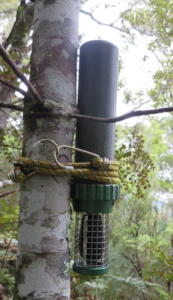 Kiwi Listening Devices were deployed at 48 locations.  Sites were selected for habitat, land use, ease of access and also to fill the gaps between   existing human kiwi listening stations that are monitored every year as part of the Northland Kiwi Call Count Survey.  The survey sites are located on a mix of public and private land.

Thalia says ” I was overwhelmed by the willingness of landowners to grant access to their land, for their time and help with (and sometimes quad rides to!) good survey points, for their generosity with cups of tea and glasses of water, and for sharing their knowledge about prior presence of kiwi in the area.  Thank you all so much!”

“We are also grateful for the assistance of project partners and other agencies, such as the NRC and DOC staff in the Pewhairangi/Bay of Islands and Whāngārei offices”.

Thalia reports that many landowners shared stores of kiwi numbers dwindling in their area to the point that they are no longer heard and are interested to learn the results from the KLDs deployed on their land.

Thalia’s next task is to analyse all the data from the Kiwi Listening Devices to find out which sites detected kiwi, feedback the results to the landowners and then write it all up in a report the Kiwi Coast.

The report will be posted on the Kiwi Coast website as soon as it is available.