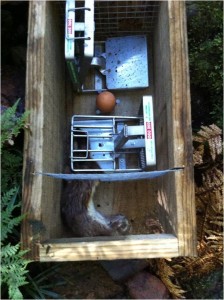 Kaimamaku Landcare is delighted to report that their new Kiwi Coast predator traps are catching well. Professional trapper, Rowan Taylor, was thrilled to catch 4 stoats during the first check of 25 new traps supplied by the Kiwi Coast.

“As part of my work, I check hundreds of traps every week, and might catch a stoat or two each time, which is always great. Setting up the new traps for Kaimamaku Landcare and catching 4 stoats in one check from just 25 traps is phenomenal. And with further traps going out over the next few weeks, come summer we’ll be hauling the stoats out of there!”

One hundred traps are now in place, with a further 15 to be deployed over the coming weeks. As stoats kill 95% of kiwi chicks before they reach their first birthday, setting up this trapping network will greatly benefit the local kiwi population as well as other native wildlife.

The new predator trap lines have been set up around the Opuawhanga Wildlife Refuge, covering approximately 200ha. The area is known to have good numbers of kiwi, but until the Kaimamaku Landcare Group got going in 2012 there wasn’t a coordinated effort to help them.

Landowner Geoff Copstick says “We can hear kiwi calling from our property. It’s great to know that the trapping is getting in place to protect them.” The Dept of Conservation was also very supportive, providing the necessary permit for Rowan to be able to trap in the area.

The QEII National Trust realised there were several covenantors keen on looking after the area in early 2012. The NZ Landcare Trust then helped the Kaimamaku Landcare Group establish and begin working together to reduce animal pests, restore the forests and help native wildlife thrive.

The Northland Regional Council helped the group to control rats and possums by supplying rat poison, bait stations and possum traps.The Kiwi Coast then came to the party, resourcing predator traps and a professional trapper to regularly service them.

The Department of Conservation has also been very supportive, providing the necessary permit for Rowan to be able to trap in the area.

Working in this collaborative way to help willing landowners protect their kiwi is just what the Kiwi Coast likes to do best.

If you’d like help to protect kiwi or set up trapping, contact Ngaire Tyson – the Kiwi Coast Coordinator.