You are here: Home / Kiwi Coast News / Introducing Agent 07 from the West Coast! 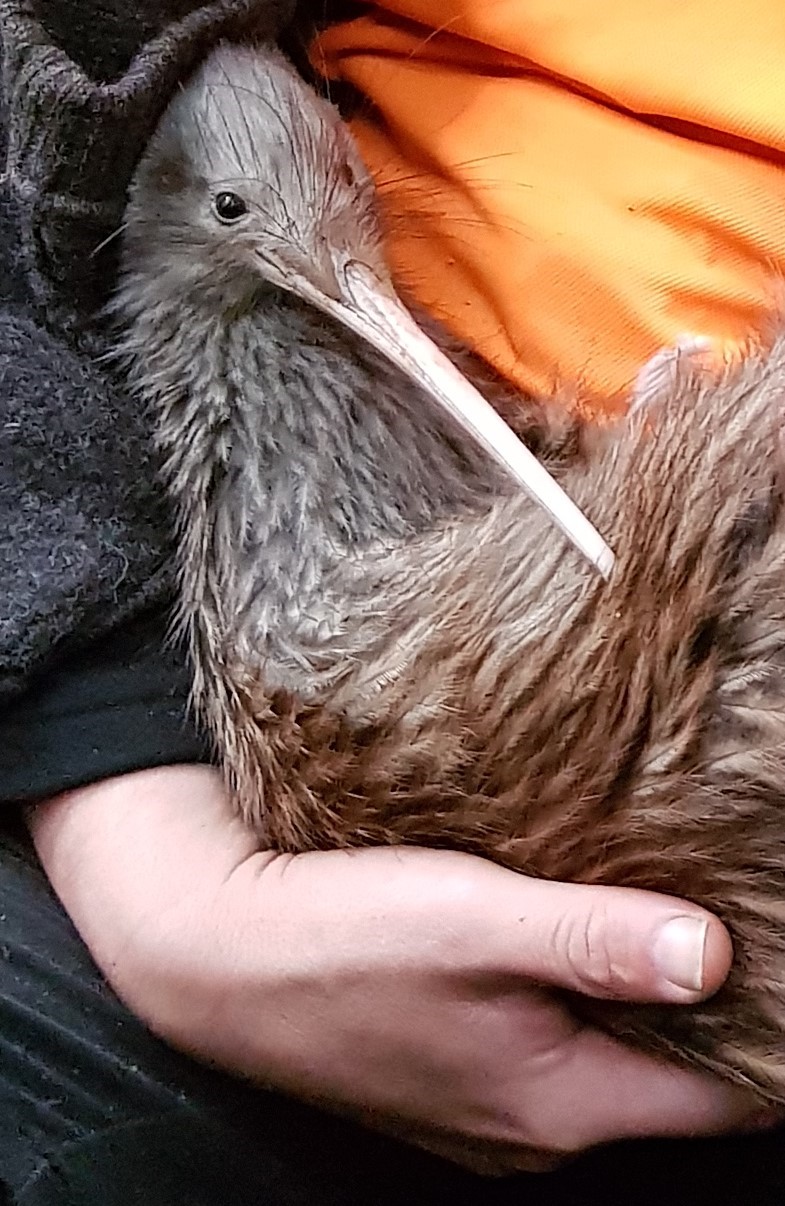 Agent 07 at his/her transmitter fitting. As a sub-adult it’s not yet clear whether this mystery bird is male or female

Dubbed ‘Agent 07’ after the number on the transmitter, the name has stuck after certain similarities to ‘007’ of James Bond fame quickly became apparent after the first two months of monitoring, such as being somewhat elusive, moving about under the cover of darkness, and being pretty good at eluding any followers!

Here’s our first update on Agent 07 – and we hope to bring more stories over coming months.

Our first month of monitoring Agent 07 went well, but then weeks later s/he was nowhere to be found. A crew was assembled consisting of kiwi handlers and a conservation dog, and the team started at Agent 07’s last known location with a basic telemetry check. There were signs of communication on the expected frequency (and many others) but instead of regular pulses the receiver picked up what can only be described as agonizing wails. These wails had no rhythm or consistency of any kind. Was Agent 07 in trouble?

The team set out walking through the thick West Coast forest trying to find the source of those electronic wails. Getting tangled in the jungle-like supplejack made the job harder but it did not matter – the signal was getting stronger.

Down a creek, up a hill, round big fallen trees, the team kept following the signal until a look at the GPS made it apparent that they were going in circles.

The next day, the team decided to go to a high point and try to get a signal from up there. The strategy paid off immediately: instead of yesterday’s wails they could hear a human voice. Was Agent 07 transmitting a signal using a new technology? A bit of fine tuning made that human voice intelligible: it was reciting a series of numbers! What an amazing discovery, Agent 07 must be a tech whizz! It didn’t take long however to realize that the numbers transmitted did not match the expected sequence. And why did the voice repeat the names of places around the Hokianga? Ah, the team realized that they were listening to an automated forecast of the tide table.

Agent 07 had outfoxed everyone, yet again.

The next attempt to find Agent 07 was done during the night. The team thought that after dark, Agent 07 would be more likely to be out looking for tucker rather than hidden deep in the thick trunk of a fallen tree. Three hours after sunset, the team went back to Agent 07’s last known position. Right away, the radio receiver picked up the electronic wails. However, this time a bit of fine tuning combined with more antenna work, new batteries, and luck or maybe some divine intervention, the expected pulse sequence came loud and clear through the speakers. Agent 07 was definitely on the move as the hand holding the antenna needed to intuitively follow the bird’s wanderings.

Nevertheless, after a few tries the team managed to decode the pulses and to find out the latest update from Agent 07. We still don’t know if Agent 07 is a male or a female but we know that it is an early riser (17:28). We also know that Agent 07 is wandering around looking for food for most of the night (almost 12 hours) and that he/she finds that being close to the road is the place to be.

Once all the data was received successfully, the team retreated quietly without letting Agent 07 know that someone has got wind of its whereabouts incase s/he decided to make a quick get-away and head for the hills!