It is not surprising, kiwi eggs are “eggseptional!” Many wild kiwi “Dad’s” across Northland are now about mid-way through their 70-90 night incubation duty. But did you know just how amazing the egg they are so tenderly caring for is? 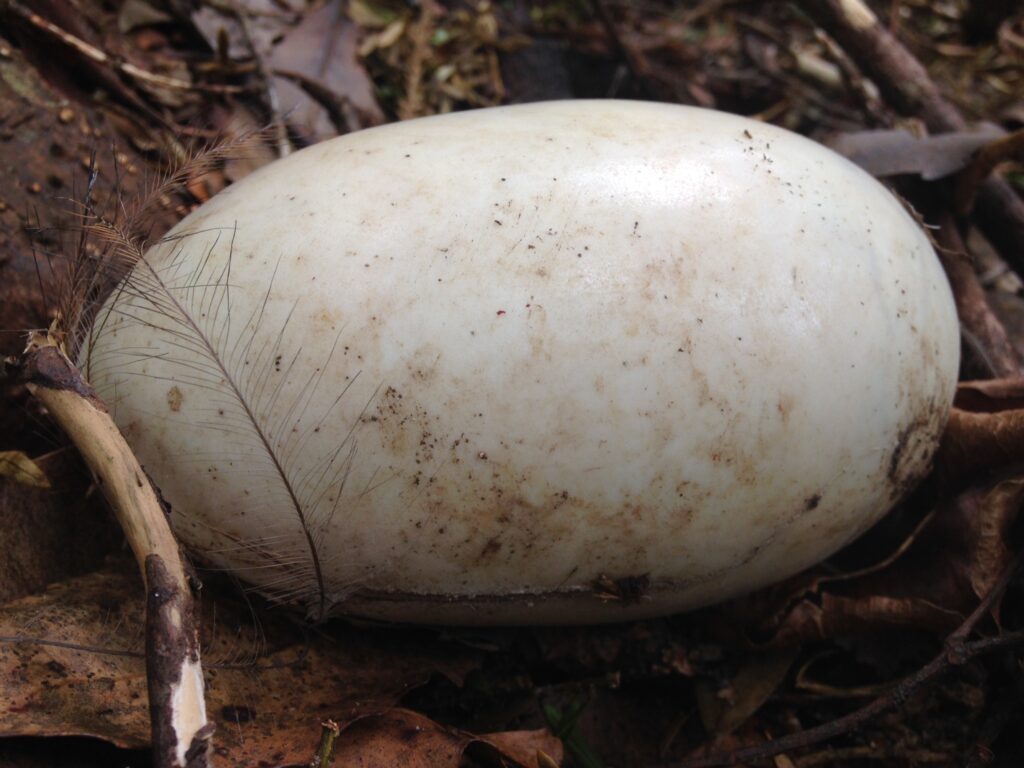 Kiwi eggs are huge. On average they weigh in around 440gm which is approximately 20% of the average weight of an adult female Northland brown kiwi.

The female kiwi is one of 1% of birds on the planet with two functional ovaries. Northland Brown kiwi will lay 2 eggs 3-4 weeks apart for the first clutch. A  second and third clutch is possible too but usually with 1 egg.

So what is going on inside that egg? Here’s all the nitty-gritty:

The yolk is constructed in layers, a bit like an onion, with each layer designed to have just what the developing embryo needs at each stage of its formation. The yolk feeds the growing embryo. It is not all used up before hatching and the rest is stored inside the abdomen of the newly hatched chick to give it sustenance for its first few days. This is known as the yolk sac.

The chick develops on the top side of the yolk. It lays on the yolk a bit like sitting on top of a big pillow on a hammock. The yolk is the pillow and the yolk membrane is the  hammock,  suspended at each end to always allow the embryo to be on top, no matter how the egg rolls. This is crucial.

But if an egg is upside down, the embryo will die. This is really important for accredited Kiwi Handlers if they need to rescue a kiwi egg and transport it to an incubation facility.

The embryo gets oxygen from small pores in the egg shell. By sitting on top of the yolk pillow, the embryo can readily access this oxygen. The pores in a kiwi egg are a double funnel shape, different bird species have their own pore design.

Kiwi eggs have a very thin shell and are very fragile.

This along with the very rich yolk and the long incubation in a damp, warm underground burrow make kiwi eggs very susceptible to infection. As Dad leaves the burrow at night for a feed, the egg cools and sucks in air from the burrow.

At some sites, nearly 50% of eggs fail due to infection with 1/4 of embryos dying in early incubation.

The embryo develops to a few thousand cell stage within the female before the egg is laid but after laying the egg cools and development stops until incubation begins. By putting the first egg ‘on ice’ and not starting incubation until the second egg is laid, the kiwi chicks will hatch closer together and reduce the days the male has to incubate.

Hatching is a very energy intense process and can take days.

Most birds have an egg tooth to help break the shell  – but not kiwi, it is all muscle power!

So spare a thought for those Northland kiwi Dad’s  – all things going to plan, there’s a lot going on inside those eggs, and a lot to get right to ensure the end result – another gorgeous kiwi chick!