The recently released 2019 Northland Kiwi Call Count Report has linked a marked decrease in kiwi call rates across Northland to the 2018/2019 drought.

Kiwi call count monitoring has been carried out annually in Northland since 1995. Call count surveys are one of the main tools used for assessing trends in kiwi populations. Each year DOC analyse the kiwi call data across Northland and report the trends found.

Analysis of the Northland 2019 kiwi call count data showed a pattern of decreasing call rates between 2018 and 2019. 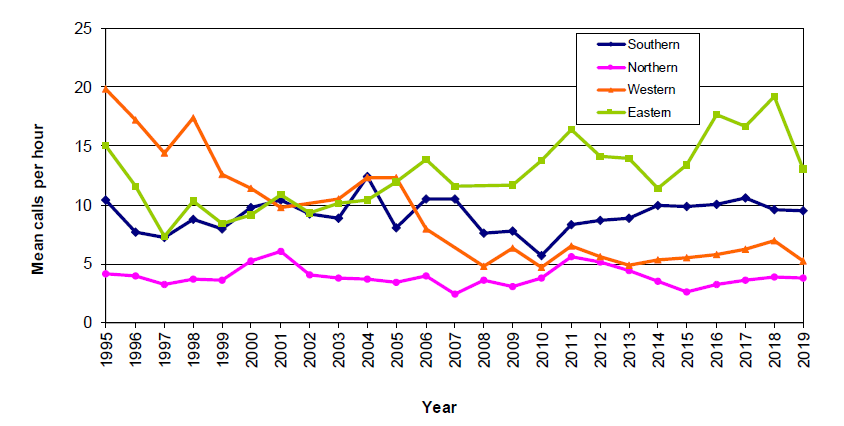 The report found that kiwi call rates had decreased at every site surveyed. As all sites were affected, rather than just one or two, a regionwide event affecting kiwi call rates at the time of the survey was suggested as the most logical explanation.

The report linked the decrease in call rates to the 2018/19 drought rather than an actual decrease in kiwi numbers.

The report stated: “The combination of dry and warm climatic conditions probably affected kiwi directly (through dehydration, heat exhaustion etc.) and indirectly (through reduced food availability etc.). The resulting relatively poor condition of the kiwi due to either or both factors likely delayed the start of the breeding season (and therefore also delayed the corresponding higher calling rates during courtship generally seen at the start of the breeding season in May).”

“Although somewhat alarming, it may be of some comfort to kiwi listeners that the pattern of fewer calls in 2019 was not unique to their station or cluster.”

Report writer Emma Craig added “It is vital that kiwi listening is continued as fully as possible in 2020 so that the effects of the postulated 2019 delayed breeding season can be separated from any genuine changes in kiwi abundance. At the time of writing (February 2020), Northland was experiencing a prolonged summer drought, so the 2020 kiwi listening may also have atypical results due to weather conditions.”

You can download a full copy of the report here.

If you would like to get involved in kiwi monitoring in your area contact either Ayla Wiles or Cinzia Vestena at the Department of Conservation or Ngaire Sullivan, Kiwi Coast Coordinator.