Over 400 locals and visitors had the thrill and privilege to welcome five more kiwi to the Parua Bay area on a beautiful Sunday evening on February 16th.

The release was part of Backyard Kiwi’s ongoing kiwi recovery work in the wider Whangarei Heads and Parua Bay area. The releases and the follow up radio monitoring of the kiwi are a cornerstone of engaging locals with their kiwi. 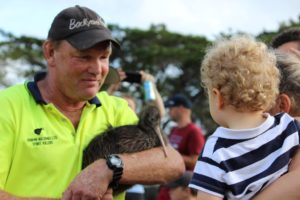 The released kiwi are part of an Operation Nest Egg program where young chicks are transferred from the Purua area west of Whangarei to the Limestone Island kiwi crèche to grow up to over 1200g before being released back on the mainland.  Thanks to Ngati Hine, Purua farmers, Department of Conservation, FOMLI (the community group managing Limestone Island), Kiwi Coast, Northland Regional Council, Kiwis for kiwi funding and others for their support of this program.

Uncontrolled dogs are the biggest threat to the local kiwi population so this is the message that is given loud and clear at the release – don’t let your dog wander and walk it on a lead! 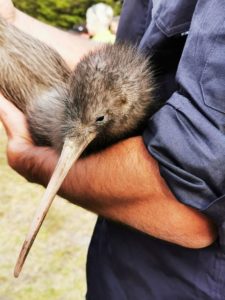 And it is working with over 900 kiwi now on the Whangarei peninsula more kiwi are making their way north of Parua Bay into the “Kiwi Link” area, where locals are working hard to look after their kiwi with stoat trapping and good dog control to repeat the success of the Heads community.

The kiwi have settled well into their new home spending time in the wetlands and in nearby paddocks feeding up on crickets. They will be calling to the local kiwi and sorting out who will settle where.

Kaitiaki is still near the release area on the Ross’s property, Kohi and Jemima have headed north down Taraunui Road, and Hancock and Taonga have headed east to the pine block between Owhiwa Road and Taraunui Road. Thanks to all who made their release so successful.

Check out http://www.backyardkiwi.org.nz/  for Todd’s monthly report on the kiwi and the map tracking their progress.