Whangārei’s wild kiwi population has been enriched with a further 19 birds at two back-to-back kiwi releases held in one weekend.

More than 450 people took the opportunity to meet the wild kiwi up close before they were released and hear how they can help keep them safe.

The first release was held on Saturday (February 13th) by the Pukenui Western Hills Forest Trust who released 14 kiwi into the 2,000 ha forest fringing Whangārei city. This was followed on Sunday (February 14th) by the release of five kiwi by Backyard Kiwi into Parua Bay.

Saturday’s addition to the Pukenui Forest hailed from the Motuora Island kiwi crèche in the Hauraki Gulf. Twelve accredited kiwi handlers and assistants from the Department of Conservation (DOC), Pukenui Trust and Northland Regional Council (NRC) travelled to the island to catch the kiwi, working through the night and finishing up at 5am after catching 14 birds.

Pukenui Ranger Bevan Cramp said on Saturday “It was a hard night’s work. The birds seemed less plentiful than usual but were all big and strong and in good health.”

Representatives from local iwi Ngāti Manuhiri travelled by ferry to meet the birds at Motuora Island, then blessing the kiwi and the travelling team as they arrived at Sandspit wharf near Warkworth. Ngati Manuhiri then escorted the kiwi to Whangārei where they were passed over to tangata whenua and representatives from hapū Ngati Kahu o Torongare.

Jeanette the kiwi just before release into Pukenui

Further names were bestowed by sponsors: Ruth Marsh and Bob Starr named a kiwi “Jeanette” after Jeanette Fitzsimmons, “Forsyth” was named after sponsors Forsyth-Barr, and Pukenui Trustee and Treasurer Audrey O’Callaghan also took the opportunity to sponsor and name “Morrie”.

The Pukenui Western Hills Forest Trust have now released a total of 54 kiwi into the forest where ongoing pest control keeps predator numbers down and kiwi safe. Ranger Bevan Cramp said that the key now was for landowners backing onto the forest and people out exercising their dogs, to be extra good with their dog control.

“Keep an eye out for the signs around the forest fringes that remind people where dogs can be walked on leads and which areas are only for people to exercise in.”

The five kiwi released by Backyard Kiwi were graduates from the Matakohe-Limestone Island kiwi crèche in the Whangarei Harbour.

As the release was held on Valentines Day, one of the birds released was given the name “Valentine” by the community group that manages the island crèche – Friends of Matakohe Limestone Island – and another was named ‘Aroha’. The remaining three kiwi were named by or after locals in the wider Parua Bay area who have contributed greatly to kiwi conservation over many years.

A whakawātea ceremony was performed by Te Parawhau kaumatua Fred Tito at Onerahi as the birds arrived back on the mainland. Danny Tuato’o from Ngāti Wai welcomed over 250 locals to the public release later that evening at the Parua Bay Community Hall, and blessed the kiwi before they were released. 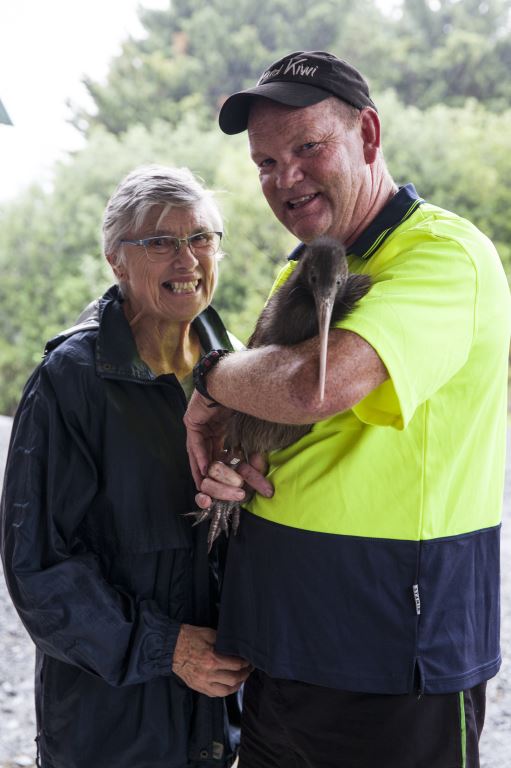 Backyard Kiwi Project Manager Todd Hamilton congratulated the Whangarei Heads community for their excellent dog control over the last 20 years which, along with pest control, had seen kiwi numbers rise from 80 to over 900.

“We wouldn’t have the 900 kiwi if we didn’t have the good dog control at Whangārei Heads” he said. “Dogs are highly attracted to the scent of kiwi and even without being aggressive they can can cause fatal injuries to kiwi. As kiwi have a very weak chest structure even a gentle squeeze from a dog  can kill a kiwi”.

Each release was a huge collaborative effort, involving teams of people from the local communities, hapū and iwi, government agencies, schools, and supporting organisations such as Kiwi North and Kiwi Coast. All nineteen kiwi were fitted with small radio transmitters that will allow their movements to be tracked as they settle into their new surrounds.

Ngaire Sullivan, Kiwi Coast Coordinator said “We are privileged to receive 19 new kiwi into the wider Whangārei area and mindful that these special birds are not confined in a zoo or behind predator proof fences. These wild kiwi are free to roam and it is up to all of us to ensure that they are safe to do so and can literally live in our back yards for generations to come.”

Both projects extended a huge thank you to the many volunteers, sponsors, supporters and funders without which the kiwi releases would not be possible, including hapū and iwi, Northland Regional Council, Department of Conservation, Kiwi North, Kiwi Coast, Foundation North and Kiwis for Kiwi Trust.