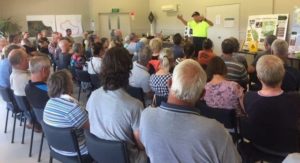 Todd Hamilton presents to an enthralled crowd at the workshop

Over seventy people gave up their Sunday afternoon to attend a trapping workshop at Mangawhai Domain Hall on November 24th.  It was chaired by Peter Hunt of Piroa-Brynderwyns Landcare (PBL) who worked with Kiwi Coast, Northland Regional Council (NRC) and local community groups to coordinate the event. The focus was on the protection of kiwi and how to achieve this through best trapping practice.

The value of the workshop was clear as a show of hands revealed that very few of the people attending had been to one before and were keen to learn how to control pests and keep kiwi safe.

Todd Hamilton, Backyard Kiwi Project Manager and key presenter, explained why kiwi were so vulnerable, outlined the main predators and demonstrated the various traps and how to use and maintain them. He covered the topics of lures, toxins and the vital importance of good dog control if you want to keep your kiwi thriving.

Steve Henderson, NRC Biosecurity Officer, gave a short presentation about possum and rat control. Finally Nancy Chaves, Coordinator of PBL Weed Action, displayed the ‘dirty dozen’ weeds that threaten the local environment and talked about the help available to deal with them.

An increasing number of community groups have sprung up in and around the Piroa-Brynderwyns area over the last couple of years. It all started when 43 kiwi were released on the Marunui Conservation property over a three year period starting in 2013. Since then, more and more locals have got involved in protecting 20,000 hectares of potential kiwi habitat surrounding the original release site. Over one thousand mustelid traps have been deployed and work continues to extend this network as the PBL Strategic Plan is implemented.

Over the past year kiwi have been heard and seen well beyond Marunui. Cathy Hawley, a founding member of the Marunui Conservation project, says:

“We regularly hear kiwi in our bush. Past trail camera footage of kiwi nests showed the birds were breeding successfully. The increasing number of local landowners getting involved in pest control and caring for kiwi and other native wildlife is really heart-warming.”

People left the workshop with the message that kiwi and their chicks will only survive if predators and dogs are well controlled. Kiwi Coast statistics show that huge efforts by the many groups and projects involved, including Piroa-Brynderwyns Landcare, are working.